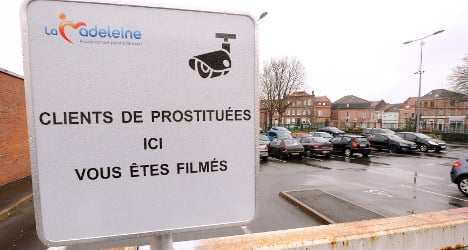 One mayor in northern France had a unique idea on how to fight prostitution. Photo: Philippe Huguen/AFP

Since last year surveillance cameras have been filming two public car parks in the town of La Madeleine, a suburb of Lille, as part of a local plan to fight prostitution.

The cameras were put in because sex workers and their clients had apparently been meeting up on a nearby street and then going the car parks to carry-out the "transaction".

Mayor Sébastien Leprêtre figured that CCTV (close circuit television) would only work if the targets knew they were being watched. He then ordered signs to be posted which bluntly say "clients of prostitutes, you are being filmed."

"When we install video surveillance cameras, we have the responsability to tell people, so we put up the signs," he told AFP. "As long as we were telling people, I decided we had better do so in a targeted way."

France is moving towards penalizing sex workers' clients with a new law is expected to come into force later in 2014 that would fine customers €1,500 if caught paying for sex. The highly controversial bill aims to prevent violence and sex trafficking, but prostitutes say it will just make their work more dangerous.

OPINION: Should France fine those caught paying for sex