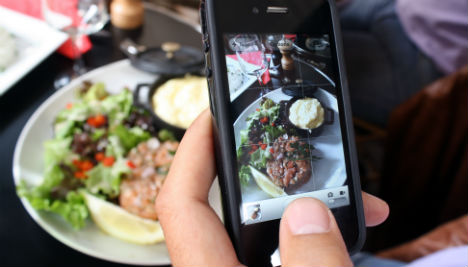 Chefs are getting into a broth over the snap now, eat later trend. AFP Photo/Ana Arevalo

The next time you try to take a picture of your dinner in a posh French restaurant, don't be surprised if an angry chef comes storming out of the kitchen.

"There's a time and a place for everything," said Alexandre Gauthier, chef at La Grenouillere in the northern town of La Madelaine-sous-Montreuil.

"We are trying to give our clients a break in their lives. For that, you need to turn off your mobile," he said.

Short of formally banning photographs in his restaurant, Gauthier has put an image of a camera with a strike-through on his menu.

"Before they used to take photos of their family, of their grandmother, but now it's photos of dishes. It is gratifying, but we're a restaurant without very much light, so they have to use a flash. And with each dish it's 'stop everything', or the photo has to be retaken three times," he said.

"It's Tweeted, liked, comments are made and replied to — by then the dish is cold."

Gilles Goujon, chef at the three-starred L'Auberge du Vieux Puits in the southern town of Fontjoncouse, said he is increasingly frustrated with the poor etiquette of amateur food photographers. He said food pictures "take away the surprise" of some of his dishes and "take a bit of my intellectual property".

Not to mention that "a photo taken with a not-so-good smartphone is rarely good. It doesn't give the best image of our work. It's annoying," he said.

One blogger at his restaurant several months ago posted a complaint about the doneness of her pigeon, complete with a picture, but hadn't cut the bird open.

"You couldn't even see how the pigeon was cooked!" said the still-fuming chef.

"It's complicated to ban it," Goujon said. "I'm trying to find the right way to say it on the menu but haven't found the proper formula so it doesn't make people angry."

French chefs are hardly alone. There has been a growing backlash in the United States to intrusive photo-taking, with some top-tier restaurants banning photography. French food blogger Stephane Riss said critics of food photographs are overreacting.

"For chefs, the more they are talked about, the better," he said. "Photos boost visibility and revenues… It's free publicity."

Riss even suggested that some chefs fear the scrutiny of photographs, which make a badly presented dish undeniable. "The chefs have to be in top form every day because if there is one mistake, it goes on the Internet," he said.

And not all chefs are so unwelcoming to the craze for food photos. David Toutain, whose eponymous Paris restaurant is a darling of the critics, said word of mouth on the Internet has been a boost to his career.

"You have to live with the times," he said. "Social networks helped at the start of my career and are helping me now. It's advertising."