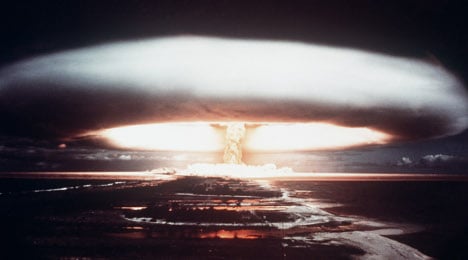 A recently declassified military map shows, contrary to what French officials said at the time, the 1960 detonation in the Algerian desert sent radioactive particles to the Italian island of Sicily and the the southern Spanish coast within weeks of the blast, French daily Le Parisien revealed.

The cancer-causing particles can remain undetected in the body for years, even decades.

This bomb, nicknamed 'Gerboise Bleue' (Blue Jerboa), was one of 17 that would ultimately take place in the Sahara Desert and Algerian mountains from 1960-66.

Those detonations, activists claim, sent much radioactive nuclear material into the atmosphere and yet civilians weren't warned of the danger.

A member of the pressure group Observatoire des Armements, one of the groups that forced France, through a 10-year legal fight, to release the documents in 2013 told The Local on Friday the government had fought long and hard to keep it a secret. “This map, from its creation a couple months after the explosion, was marked ‘top secret’ and it was forbidden to release it,” Bruno Barrillot said on Friday. “There was even a warning on each page saying you could be prosecuted for revealing it.”

He said France's desire for secrecy was due to its rush to acquire its very own nuclear weapon, but also because it was running the test blasts in a part of Africa surrounded by nations which had  recently become independent.

To tell them France had carried out tests that could hurt or kill their populations would have done little for diplomatic relations," Barillot explained.

“They lied, they hid the truth,” he said. “They knew about the dangers, but they did it anyway.”

It is very difficult to have a firm number of how many people the fallout sickened or later killed. Firstly because Algeria, until recently, has not had a systematic effort to count every case of cancer, but also the radioactive particles, including Iodine 131 and cesium 137, can lay undetected for years or even decades in a person's body.

But these particles, once in the human thyroid, can lead to cancer.

“Though it was in a bomb and was meant to explode, the substances inside were the same ones release in Chernobyl and Fukushima,” he said. “The result is the same.”

Barrillot said his pressure group and others pushed France to release these documents in an effort to bring compensation to people whose health  was affected by the radioactive fallout. France has accepted that people in a certaint small area (see the blue blob on the map) will have been affected by the fallout and since 2010 it has had a reparations scheme in place, but the criteria are very narrow.

Barrillot hopes the maps will force the government to admit that many more people could have been hurt bay the blasts fallout. He believes the dangers of theses tests has always been obvious.

“They didn’t do these tests under the Eiffel Tower,” Barrillot said. “No, they went far away from France and then lied about the true impact."

France’s Ministry of Defence did not immediately respond to a request seeking comment on the implications of the map’s publication.