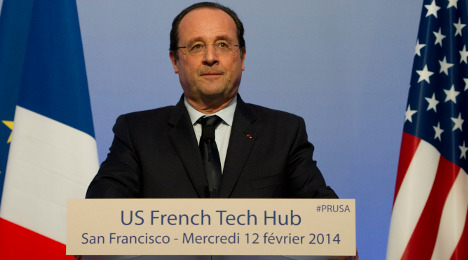 President François Hollande gave a speech to the French community in San Francisco in which he promised more help for French start -ups. Photo: Alain Jocard/AFP

French President François Hollande came face to face with some of his fiercest critics in San Francisco on Wednesday, where he announced measures to favour French start-ups.

On the last day of his visit to the United States, Hollande said that "France must recognize the dynamism of its entrepreneurs".

Hollande met with members of the French community including the leader of the group known as "The Pigeons", who had launched a revolt when the president announced plans in 2012 to double capital gains tax to 60 percent, before backing down.

As he toured the Tech Hub, Hollande met Carloz Diaz, leader of "The Pigeons" and the pair were photographed exchanging a hug, which was seized upon by the French media. In October 2012, when "The Pigeons" were formed one of them was quoted as saying: “I’ve never seen people so depressed. They’ve had enough, they are leaving."

But on Wednesday Hollande took steps to try put that right.

He announced a series of measures that he hopes will boost the chances of start-up companies succeeding in France, including the idea of offering "talent passports" to bright foreigners.

The idea is to attract more foreign creators, innovators and entrepreneurs and enable them to receive French visas more easily.

Hollande noted that attracting start-up talent means paying at the same level as major companies, "which is not easy when a business is created".

He said that allowing for various share options could help attract top talent.

"France must recognize the dynamism of its entrepreneurs" and promote "the spirit of initiative" he said before several dozen French start-up leaders gathered at French Tech Hub, a business incubator located in San Francisco, at Silicon Valley's doorstep.

The French president also promised to launch a new push for crowdfunding, with the adoption of a rule next month that will promote the financing method, popular in the United States.

"A project can collect up to a million euros in loans via crowdfunding" for the creation of businesses, he said.

Hollande also called on the president of French employers union MEDEF, Pierre Gattaz, who was accompanying him, to encourage major French firms to make offers to students at the end of their studies similar to what is being done in California.

This would allow students to "have the job security to then develop their own business," he said.

He made no mention of his views on the tax optimization strategies used by multinational Internet giants such as Google, which he described as "unacceptable" a week ago, vowing that France would not continue to tolerate them.