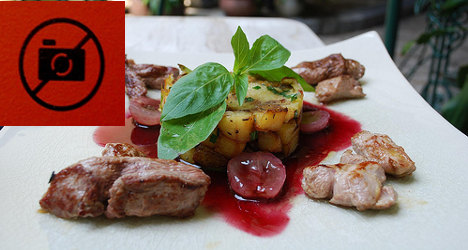 Chef Gilles Goujon runs the show at L’Auberge du Vieux Puits in southern France and holds three coveted Michelin stars but he was none too happy about his food being the subject of an impromptu photo shoot recently.

Citing the example of his dish chicken egg "laden with" truffles (oeuf de poule "pourri" de truffes) Goujon said diners taking snaps of the dish will spoil it for others.

“If people take a photo and put it out on social media, it takes away the surprise,” he told AFP. “It takes away a little bit of my intellectual property too. Someone could copy me.”

Chef Alexandre Gauthier, holder of a Michelin star, has gone beyond complaining about photos. At his restaurant the Grenouillère in the northern French town of Madelaine-sous-Montreuil the menu carries a picture of camera with a line through it, making it clear to diners to keep their mobile phones away from the table.

“Photos aren’t forbidden, but I want people to question it,” he said, noting it will concern only a minority of customers.

He went on to lament the change in what people found important enough to photograph.

“They used to take family photos, of their grandmother, and now its photos of food,” he said. “We tweet, we ‘like’, we comment, we respond. And the food is cold.”

“We try to create a brief aside in the life of our clients,” he added. “In order to do that, you have to disconnect from your phone.”

Chefs in New York have taken offense to the photo obsession as well. A  New York Times article in January said some restaurants in the Big Apple had gone so far as to ban the amateur food photographers.

The move was made after diners reportedly started bringing photo gear and standing up on their chairs to get the best shot.

“It’s difficult to forbid it,” Goujon said. ”I’m looking for a sentence to write (on the menu), but I haven’t yet found the right words, which won’t be too shocking."