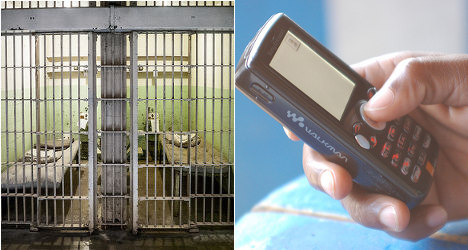 Should obile phones be allowed in prisons to calm inmates down? Photo: Jumilla Fishermans/flickr

Most western nations prohibit prisoners from having mobile phones behind bars. It’s a seemingly obvious step to limit prisoners' links to the outside world and in some cases stop them from running their rackets from a prison cell.

However, France’s top prison official said on Wednesday he now supports allowing prisoners to have mobiles in their cells.

“We are tiring out our personnel with searches for mobile phones. It is a bottomless well,” Jean-Marie Delarue, the general controller of prisons,  told a National Assembly committee, TF1 reported.

“I believe that there will come a day when we will have to allow mobile phones in prison."

Earlier this month The Local reported how a French crook was busted for scamming elderly ladies from his cell. He'd been using a mobile phone to call them up and demand payment for "overdue" bills.

And last year we reported how prison authorities were leff embarassed after a video emerged of inmates doing a Harlem Shake. It had been taken on a mobile phone. (SEE LINK BELOW) But Delarue clearly sees the positives in lifting the ban.

He explained that authorities at Baumettes Prison, in Marseille, which is considered overcrowded and dangerous, seize about 900 phones per year. The jail houses around 1,700 prisoners and yet with so many phones seized, detectives don’t have the resources to investigate them all.

While mobile phones are presently forbidden for prisoners, they are allowed to call the outside world on prison-operated landlines. These calls can be and frequently are monitored by authorities.

Delarue said he asked prison authorities around France if they’d support a change in the rules.

“They told me it wouldn’t change anything, but it could considerably calm things down behind bars,” he said.

He cited examples of prison riots sparked by guards searching for and taking away prisoners’ mobiles. In December 2013 a search in the north-western French prison in Argentan sparked days-long unrest that led to vandalism and fires.

The day before the rebellion broke out prison guards performing searches had seized 20 phones.

“The prisoners held in Argentan are cut off from everything. It’s all they have left, a mobile phone,” Delarue said. “I’d rather we allow phones and we check them every 10 days and see who they have called.”

Delarue is no stranger to controversy for his ideas about the prison system. In 2011 he suggested prisoners have access to an electronic messaging system, similar to e-mail.

He noted letters are already allowed and the new system would be subject to same checks and censorship. But like with lifting the phone ban, he noted it would keep prisoners calmer while they served their sentences.

“I truly hope the public powers act with little delay,” he told lawmakers.

Not surprisingly the idea of lifting the mobile phone ban has drawn some opposition.

“Honestly I don’t know what good it can bring,” Baumettes prison guard union official David Cuchietti told newspaper Metronews. “If we allow them I’m afraid we are opening the door to all sorts of trafficking, but also new rackets between prisoners.”

Earlier this month The Local reported how a French crook was busted for scamming elderly ladies from his cell. He'd been using a mobile phone to call them up and demand payment for "overdue" bills.