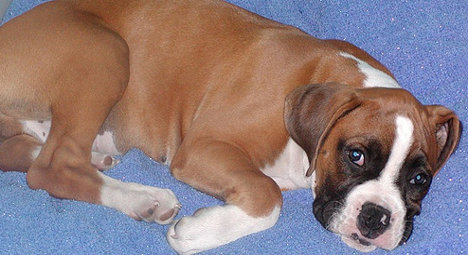 A man was jailed for throwing a boxer dog (not the one in the photo) from his third floor window. Photo: Tgaume/Flickr

A 42-year-old man was jailed for six months by a court in the southern town of Beziers this week, for throwing his dog, named Pouchka, from his third floor window.

The 13-month-old boxer, did not survive the nine-metre fall. Pouchka was found on the ground lying in a pool of blood, with several broken bones.

The owner told the court that he threw the dog when he was feeling “an excess of delirium”, local newspaper Midi Libre reported.

It wasn’t just the dog that was launched into mid-air. The man threw out everything he could get his hands on, the newspaper said.

He was jailed on the grounds of cruelty to animals.

A local animal welfare charity SPA, who was a civil party in the case, blasted the act.

“He killed a dog. He threw it out of the window like a crumb of bread. We are hoping he is permanently banned from being allowed to have a pet,” said Mr Auret from SPA.

In his defence the jailed man’s lawyer said he was under the influence of alcohol and anti-depressants.

The lawyer also said the case cannot be compared to the recent high profile story in Marseille, where a man filmed himself throwing a kitten as high as he could against a wall. The cat thrower was later jailed. “We cannot compare the intentional act in Marseille to the one committed by my client where he was not in charge of his own senses,” the lawyer said.

The court disagreed and as well as the jail sentence, it ordered the man to pay €500 to the SPA.