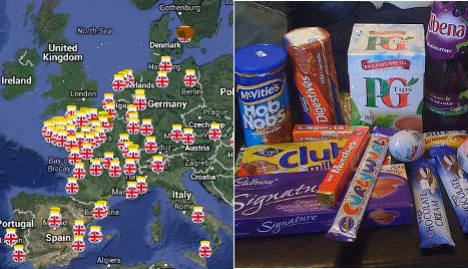 Expat financial advisor Which Offshore has come up with an innovative way of satisfying the gastronomical yearning some Brits get when they’re living abroad. Photo: Which Offshore, Yoz Grahame/Flickr

Expat financial advisor Which Offshore has come up with an innovative way of satisfying the gastronomical yearning some Brits get when they’re living abroad.

“The idea for the map came from the thought: “can you get crème eggs on the continent?," Which Offshore online editor Michael Brinksman told The Local.

“Expat forums and articles revolving around culture shock always mention adjusting to the cuisine of your new host nation and missing food from back home, so we thought it would be a very useful tool.

"This is particularly true for us Brits, who are very proud and protective of our distinctive and divisive foodstuffs, hence the choice of a Marmite jar for the shop icon.

“The “Ultimate Interactive Map” really is an aspirational title, though. We really want suggestions from expats around the world to help us make the map a truly comprehensive guide to buying British food abroad."

And for those expats in France wo struggle toget by without regular does of cheddar; marmite or baked beans, Brinksman said the should count themselves lucky.

“Despite Britain and France’s long and storied history, the French really do spoil British expats when it comes to stocking beloved British brands and foodstuffs," he said.

“The Marmite jar is for stores that sell British food products, the pig is for butchers and the pie is for bakeries,” Brinksman explained.

Thanks to the Google Maps interface users can zoom directly into the exact location of the store and also access contact details and a website if available.

“Spain and France seem to have the greatest number of British food shops, but we want users in other parts of the world like Scandinavia and Eastern Europe to let us know of any other stores as the aim is to continue updating it.”

The Which Offshore team also came across interesting findings during the research, like the abundance of British bakeries in South East Asia, where a fascination for English scones is reaching new