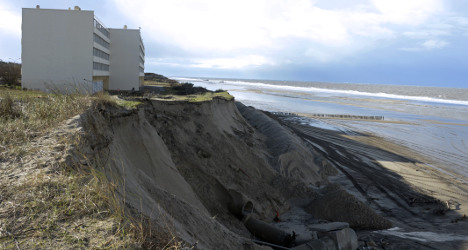 The dune at the foot of the building "Le Signal", is being consolidated on January 30, 2014, in Soulac-sur-Mer, southwestern France. Photo: Jean-Pierre Muller/AFP

The erosion of a coastline normally takes place over decades and centuries. But in western France it happened a lot quicker this winter, with storms taking 10 metres of land off parts of the Atlantic coast, a new study revealed.

The Aquitaine Coast Observatory said this week that its picturesque, beach lined coast had been eroded by at least 10 metres, because of all the recent storms and tidal waves.

“In general all of the Aquitane coast has been heavily eroded,” due to the storms of December 23rd to 27th and January 3rd to 7th, and the heavy swells during this period, the observatory said.

Scientists blamed the number of waves that reached four metres in height, which lashed the coast.

The department of the Gironde has been the worst affected. “The beaches have been lowered and flattened, which has thus limited their resistance to the assaults from the ocean. This fragility has been increased by the temporary disappearance of sandbars," the Observatory said.

In the Gironde the erosion is more visible with the sea taking its toll on the sandy cliffs, destroying access to the beaches as well as damaging coastal structures like promenades.

The erosion has also threatened beachside residences and caravan parks, as seen in the picture above in the town of Soulac-sur-Mer.

SEE ALSO: Remnants of D-Day harbour wear away at sea

In January Le Signal residence was evacuated when it looked as though it was going to fall into the sea.

Around 45 years ago, Le Signal was away from the sea by 200 meters. Now, the distance is 16,50m. The tweet below shows the erosion over recent years.

The video below from FranceTV shows the impact the power of the sea has had on France's Atlantic coast.