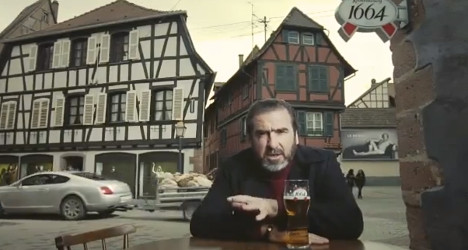 An advert for Kronenbourg 1664 beer has been banned in Britain for being misleading. Photo: Screengrab YouTube

British regulators on Wednesday banned adverts for Kronenbourg 1664 starring former footballer Eric Cantona for "misleading" consumers into believing the lager was brewed and sourced in France.

The advertising campaign boasted: "If you find a better tasting French beer, we'll eat our berets," adding: "The French know a thing or two about taste. That's why Kronenbourg 1664 is always brewed with the aromatic Strisselspalt hop for a taste supreme."

The ASA found that the hop was only one of several used to create the lager.

"We considered that the degree of emphasis in the ad on the contribution of French hops to the beer, including the statement that the hop farmers in Alsace 'are the men that grow the noble hops that make Kronenbourg the taste supreme' implied that all, or a significant majority of, hops used in the brewing process were sourced from France," it said in its ruling.

"We also noted that it (Strisselspalt) did not constitute a significant majority of the total hops used in the recipe for the beer. We therefore concluded that the ad was misleading."

In the television advert, Cantona says: "Here in Alsace, things are a little bit different. The hop farmers are treated like the footballers of Britain. They are idolized and adored. And why not? They are living legends. They are the men that grow the noble hops that make Kronenbourg the taste supreme.

Small print shown at the end reveals that the lager is brewed in the UK, leading to two complaints.

Heineken UK insisted that Kronenbourg 1664 was "an inherently French beer" that had first been brewed in 1952 in Alsace by Brasseries Kronenbourg and was now brewed under licence in the UK.