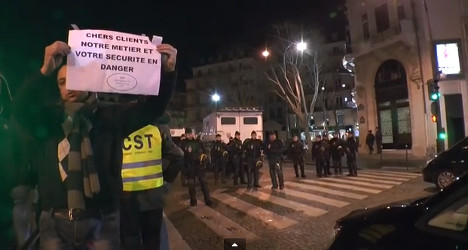 Paris taxi drivers continued to vent their anger on Tuesday when they brought traffic to a standstill in the centre of the French capital leading to the arrest of dozens of drivers. The trouble comes as unions called for ongoing industrial action.

On Tuesday evening as cabbies fronted up to police at Place de La Concorde union leaders called for an indefinite strike, which could see wildcat blockades and go slows continue for the foreseeable future.

In a joint statement drivers’ unions said they "reserved the right to take action at any place at any time.”

Strike action was already under way early Wednesday, with some 70 taxis blocking pick-up spots at Orly airport south of Paris and a convoy slowing traffic from Charles de Gaulle airport north of the capital.

SEE ALSO: "Not all Paris taxi drivers are rude"

The cabbies are angry over what they see as a rise in unfair competition from private hire cabs, known as VTCs and a lack of protection from the government.

Taxi drivers say VTCs are increasingly flouting the rules and stealing their business without having to respect the costly regulations imposed on taxis.

Salt was rubbed into their wounds last week when a government plan to impose a 15 minute delay before VTCs could pick up their passengers, was thrown out by the Council of State.

The taxi unions are calling for VTCs to be limited by a 30-minute delay and a minimum fare of 60 euros — which would effectively close them out of the market for trips within central Paris.

Cabbies say they will contiue to protest until the government puts a block on handing out new licenses to VTCs.

After holding a strike on Monday that brought the peripherique to a standstill as well as the main roads from Paris two airports, taxi drivers continued to protest on Tuesday.

A 100 drivers blockaded Place de La Concorde before moving on to Gare du Lyon. According to RMC radio 64 drivers were arrested by police overnight when officers moved in to break up the blockade. THey were later released without charge.

A new national day of mobilisation has already been set for March 13.

For its part the goverment has appointed a mediator Thomas Thévenoud, who has the unviable job of trying to bring the two sides together.

On Wednesday he called for calm, saying the message from taxi drivers "has been heard loud and clear".

"I call on everyone to gather around the table with me, to talk, to listen, to compromise and to find a new system," he told BFM-TV.

Thevenoud has been mandated to come up with a system of "balanced competition" between taxi drivers and VTCs within two months.

Taxi drivers have for years jealously guarded their right to operate on the streets of Paris, leading to accusations of artificial shortages in the French capital.

Licenses are granted by the government for free, but in limited numbers, and are sold amongst drivers for around 230,000 euros ($315,000).

The license to operate a VTC costs only 100 euros.