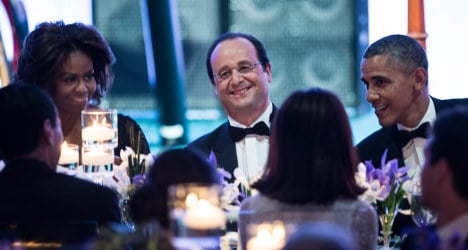 Barack Obama praised France's President Francois Hollande as a leader of "courage" Tuesday, and wined and dined his solo guest at a lavish state dinner.

Hollande relished center stage at the White House, as President Obama praised his resolve in tackling extremism in Africa and a nuclear challenge from Iran.

The French president said that common founding values of liberty meant France and the United States could act together for global security.

"We want to be together again," he said.

The new partnership was on display as Hollande's limousine swept under the North Portico of the White House on a chilly Washington night. (The Obamas with Hollande. Photo:AFP)

Obama stood waiting in a sharp tuxedo, while his wife Michelle was resplendent in a sumptuous gown, with a black bodice and flowing periwinkle skirt designed by Carolina Herrera.

Stars of culture, business and politics greeted Hollande in the plush marquee set up on the White House grounds.

Hollande sat at the top table between Obama and the First Lady.

His split with Trierweiler, after revelations of an affair with an actress, prompted some hurried juggling by the White House social office.

Raising a toast to his guest, Obama said "Vive La France, God bless America, and long live the alliance between our great nations."

Hollande returned the favor, joking: "We love the United States and you love the French, although you're sometimes too shy to say so." On the menu was American caviar, quail eggs, rib-eye steak, and Vermont blue cheese, washed down with a selection of American wines, along with music by Mary J. Blige, who sang a few lines from Jacques Brel's "Ne me quitte pas."

That was followed by a gospel rendition of U2's ballad "One," which had the Obamas and Hollande on their feet and clapping. The First Lady showed off some dance moves.

Earlier in the day Hollande gave the world a rare glimpse of his English skills, which perhaps unsurprisingly were slightly better than Obama's level of French. See for yourself here.