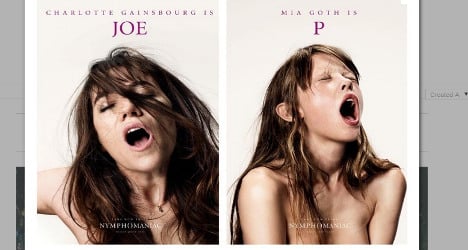 During an afternoon broadcast on I-tele a free to air newschannel, a journalist was talking about Nymphomaniac's  presentation at the Berlin Film Festival and then parts of the trailer were shown to illustrate his point.

The only problem is the x-rated film, which stars Charlotte Gainsbourg as a self-diagnosed nymphomaniac, has a ‘soft’ and a "hardcore" verson of the trailer. And unfortunately for I-tele and the journalist it was the latter that went out to viewers.

Thus folks at home got to see, among other things, a close up shot of oral sex.

The station immediately apologized on air for the mess up claiming it was due to a production error, but they could face more than simple embarrassment.

Showing the sex scenes in the middle of the day is a fairly clear violation of the law.

Also, pornographic material can only be shown on TV with prior official approval from authorities and then only at night and of a limited quantity.

France’s official censor the Conseil Supérieur de l’Audiovisuel could take action, but they can only look into matter if there has been a complaint.

When contacted by The Local, CSA said it would look into whether anyone was upset enough by the trailer to phone in and gripe. No word from the censors yet.

Here is the (relatively) soft version of the trailer, though be advised it still includes nudity and sexual content.