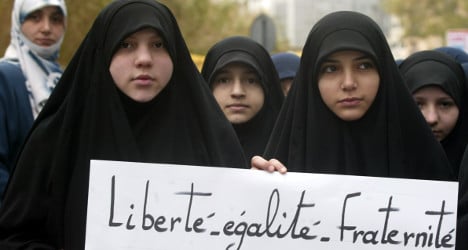 A French firm claims to have become the first to ban the wearing of religious symbols at work. Photo: AFP

From Tuesday onward the 4,000 workers at recycling company Paprec, based in the Parisian suburbs will no longer be allowed to demonstrate their religious faith by wearing items like the Yarmulke/Kippah (the Jewish skullcap), Christian crosses and Muslim head or face covers.

Paprec’s CEO Jean-Luc Petithuguenin said he set the new rules, which he claims are the first of their kind, after four months of negotiations with representatives of the company’s employees. The result was an eight-article agreement that follows closely the principles already laid in French secular laws.

The new restrictions are modeled on France's landmark 2004 law that banned the wearing of conspicuous religious symbols in French state schools and other government buildings. Although the law makes no reference to specific symbols many considered it was to specifically target Muslim headscarves.

The crackdown may have caused controversy and provoked headlines across the globe, but in France, where secular principles, known as laïcité, hold strong, polls have repeatedly shown that the public firmly support these so-called veil laws.

Paprec’s new rules come on the heels of a French appeals court ruling at the end of November which backed the owner of a nursery who had fired a Muslim assistant who refused to take off her headscarf at work. The scandal, named the"Baby Loup" affair after the name of the creche in the Parisian suburbs, provides some legal backing for Paprec’s ban.

However the Paprec’s CEO agreed the company's new rules leave it open to possible litigation.

“We plan to defend our point of view, to defend what we voted for as a group,” Petithuguenin told AFP. “But yes, we are taking the risk that the courts tell us ‘you are wrong’. I am prepared to take on this risk and hope, for the benefit of my country, that I won’t be condemned."

However, professor Raphaël Liogier, Director of the French research organisation Observatory of Religions says what Paprec is doing is plainly illegal.

"The 2004 law was based on protecting children, because it was presumed they were too young to make up their own minds about religion," Liogier told The Local on Tuesday. "However, this would not apply here. It would be illegal, even if the employees have voted on it. There's no legal justification for it."

"They simply can't do it. The only way it would be possible is if the job requirements put restrictions on certain items of clothing, for example if the were using machinery etc."

Paprec's CEO may find that he has support both for the move both at government level and among the wider public.

In the aftermath of the Baby Loup affair France's government spokeswoman Najat Vallaud-Belkacem said ministers would consider imposing legislation to uphold the principle of secularism in private work places.

If a bill was proposed, opinion polls suggest it would receive strong backing from the public.

A whopping majority – 84% – of the French people now oppose the wearing of the Islamic veil or headscarf in private workplaces frequented by members of the public, according to a poll published by regional daily Ouest-France.

Another poll found that 83% would be in favour of outlawing religious clothing or symbols in all private businesses such as Paprec.

The surveys were conducted in the middle of the "Baby Loup" affair.

But Professor Liogier believes France, home to Europe's biggest Muslim population of around 5 million, is far from introducing a law that would extend the veil ban to private companies.

"The Constitutional Council would never accept it, or they would have to change the French constitution to get it passed," he told The Local.

And it is not just a ban on religious symbols in work places that has received backing. A report published in August last year, suggested the wearing of veils should be banned throughout France's universities.

Her lawyers had argued that the burqa ban impinges on religious freedom and unfairly targets Muslims, but the court ruled "it could not make exceptions to the law of the land."

Should the wearing of religious symbols be banned from work places in France?