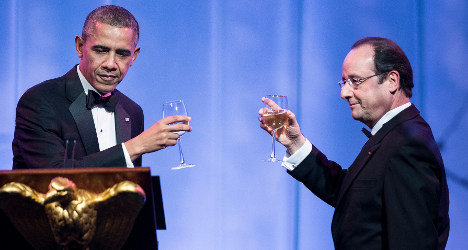 US President Barack Obama and his French counterpart François Hollande share a glass of champagne before the State dinner. Photo: Brendan Smialowski/AFP

French President François Hollande, speaking alongside his US counterpart Barack Obama, said on Tuesday that the two allies had resolved their differences over American digital eavesdropping.

Leaders from many US allies, including Germany's Chancellor Angel Merkel, were angered by intelligence leaker Edward Snowden's revelation that the United States monitors their telephone calls.

But it is not known if Hollande's own telephone was tapped, and France has been more cautious in its critique, emphasizing the importance of its intelligence cooperation with Washington.

"We wanted to fight against terrorism, but we also wanted to meet a number of principles. And we are making headway in this cooperation. Mutual trust has been restored," Hollande said.

Hollande has not allowed concern over US spying to darken the mood of a much-anticipated state visit to Washington, but he did reiterate European concerns about data privacy in the Internet age.

"Mutual trust must be based on respect for each other's country, but also based on the protection of private life, of personal data," he said, during a joint White House news conference.

Last year, information technology contractor Snowden fled from his job at the US National Security Agency's Hawaii offices, carrying with him a vast trove of classified intelligence information.

The fugitive turned over the material to journalists, launching what has become a steady drip-feed of revelations about the NSA's activity, much of it embarrassing to Obama's administration.

Outrage in the United States has concentrated on the news that the NSA routinely swept up vast quantities of "metadata" attached to private calls made by ordinary Americans.

But internationally, allied leaders have been angered to learn that their own cellphone conversations have been tapped by US agents.

Obama also said on Tuesday that foreign firms testing commercial prospects in Iran did so at their own peril and vowed to come down like a "ton of bricks" on sanctions violators.

Obama spoke alongside French President Francois Hollande a week after a large French business delegation traveled to Tehran to test opportunities that could be opened by the easing of Western sanctions.

"Businesses may be exploring — are there some possibilities to get in sooner rather than later if and when there is an actual agreement to be had?" Obama said.

"But I can tell you that they do so at their own peril right now. Because we will come down on them like a ton of bricks."

Hollande, meanwhile, said that he did not control French corporations but had made clear sanctions on Iran would not be dismantled until a final deal on Iran's nuclear program had been reached.

"Sanctions will only be lifted if and when there is definite agreement," Hollande said. "During this period of the interim agreement, they remain in force."

The 116-strong French delegation, with representatives from major companies like Total, Lafarge and Peugeot, was the largest of its kind from Europe since a landmark nuclear deal reached with the major powers in November gave Iran limited relief from crippling US and EU sanctions.

The American president also hailed the "courage and resolve" of his French counterpart Francois Hollande in foreign policy matters, at a White House joint press conference.

"From Mali to Syria and Iran, you have shown courage and resolve, and I want to thank you for your leadership and being a strong partner to the United States," Obama told reporters.

Obama confirmed on Tuesday he will travel to France in June to commemorate the 70th anniversary of the D-Day landings of allied forces in Nazi-occupied Europe.

Obama said he had accepted an invitation to make the visit from French President François Hollande, after the two men met at the White House.

Queen Elizabeth II, the head of state of Britain and Canada, has already announced that she will attend the tribute on the Normandy beaches, which more than 150,000 US, British and Canadian troops stormed on June 6th, 1944.