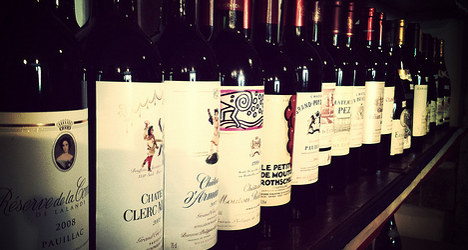 Police raids targeted a gang of robbers believed to be behind a €1 million wine heist. Photo: Fareham Wines/Flickr

The raids, that led to the arrest of 20 suspects on Monday, were carried out in connection with a spate of thefts targeting some of the most prestigious vineyards in the famed wine region around Bordeaux.

Police said the wines pilfered between June 2013 and January were worth around €1 million ($1.35 million). Officers believe five of the men arrested were the ringleaders of the operation while the others were involved in moving the wines on to buyers.

The arrests drew a sigh of relief from winemakers in the region who have been plagued recent years by similar thefts.

"Stealing top growth wines is tempting because they are high-value products that can easily be sold on, one bottle at a time if necessary," Bernard Farge, the president of the Bordeaux wine board (CIVB), told AFP. "There have been thefts like this before but never in these proportions."

An operation involving more than 300 officers in several areas of south-western France and the Paris region had dismantled a "very structured, professional" operation," police said. Some of the men detained are well known to the authorities.

“It was a highly organized group,” Gironde regional police colonel Ghislain Rety told Le Parisien. “In each case they would steal a van and then head to the vineyards they had already selected. They would then load up several dozen cases of wine.”

Once the thieves had made their escape they would clean any fingerprints off the vehicles with bleach and finally set the vans alight. French police did not say what evidence they had tying the suspects to the crimes.

The properties targeted by the thieves have not been divulged. Producers are extremely sensitive about the security of their stocks and about any security lapse which would offer opportunities for the production of counterfeit bottles.

Prices of the very top Bordeaux wines from good recent vintages can easily exceed €1,000 a bottle, while older and rarer bottles can be worth many times that amount.

With France's long standing and highly lucrative wine industry, these weren't the first suspects to be accused of stealing some of the good stuff.