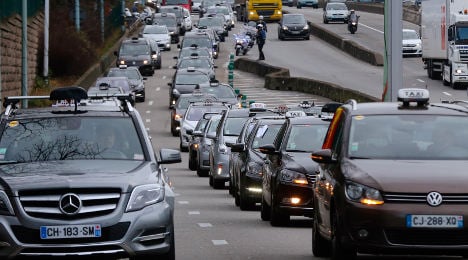 Taxi drivers staged a go slow protest on Monday that was expectedto cause delays on certain roads. Photo: Francois Guillot/AFP

Taxi services out of Roissy-Charles de Gaulle and Orly airports in Paris were at a virtual standstill on Monday as drivers went on strike over competition from rival mini-cabs.

For the second time in less than a month, there were huge traffic jams on the outskirts of the French capital as convoys of hundreds of taxis made their way at snail pace towards a demonstration in the city centre.

An airport spokesman at Roissy said no taxis were picking up travellers from France's main hub for international flights while ranks at Orly, to the south of the city, were blockaded by over 100 cars belonging to drivers involved in the strike.

By mid-day there had been no reports of the sort of violent attacks on minicabs which marred a similar day of protest last month amid signs that drivers of the rival cars had decided to stay away from the airports.

Minicabs, known in France as tourist vehicles with chauffeur (VTCs), were only authorised in 2009 as an attempt to address chronic shortfalls in the availability of taxis, particularly in Paris, the most visited city in the world.

This was the scene at Porte Maillot earlier on Monday with taxi drivers claiming to have blocked the peripherique at the western entrance to Paris.

Monday's protest stems from a decision last Wednesday by France’s highest authority on administrative law, the Council of State (Conseil d’Etat), to suspend a rule that forced the private hire cabs, known in France as VTC vehicles, to wait a minimum of 15 minutes after a reservation had been made, before picking up a fare.

VTCs differ from 'official' taxis in that they don't have luminous signs on their roofs, have to be booked in advance and do not have the right to pick up passengers who hail them in the street.

Taxi drivers say the VTCs are increasingly flouting the rules and stealing their business without having to respect the costly regulations imposed on taxis.

The idea of the proposed law was to protect traditional cabbies who unlike private hire cab drivers can pick up a client any time and any place in their jurisdiction.

But the Council of State saw it as unfair to private hire firms and so scrapped the rule, which as you can imagine did not go down well with the country's fleet of taxi drivers.

“In other countries there is one to three hours delay for private hire cabs. There are also hefty pick up charges: €90 in Spain $70 in the United States. We only had 15 minutes and yet the Conseil d’Etat figures it’s illegal and that it prevents them from working.”

“It’s totally atrocious. Taxi drivers are being swindled. The 15 minutes, even though VTC drivers didn’t honour it, allowed for some moderation.”

Protesters tweeted pictures of their action as they gathered on Monday.