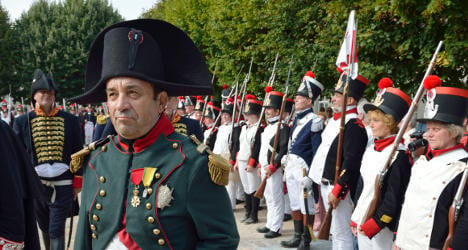 France's former Emperor Napoleon, played here by an actor. A security guard sat in Napoleon Bonaparte's chair and ripped it at a museum in Corsica. Photo: Eric Feferberg/AFP

Talk about the damage that having a Napoleon complex can do. A guard at the Musée Fesch d’Ajaccio, a fine arts museum in Corsica’s largest town, couldn’t help indulging his inner emperor last week. He must have lived to regret it.

Normally museum exhibits come with a "Don't Touch" sign but the guard evidently ignored protocol and lowered himself down into the former emperor's “chaise de campagne”, or military campaign chair.

But when he did the historic leather seat ripped in two places, France TV reported this week.

The 200-year-old piece of folding furniture was in the former French military commander’s native Corsica on loan from Le Mobilier National, the body charged with conserving France's historic furniture, for an exhibition in Ajaccio.

Not long after the damage occurred museum officials called for a restoration expert who has since repaired the torn red leather. The incident actually happened on Thursday, but was covered up by museum officials until local papers revealed the damage.

"The end result is that the chair has now been very well restored, which it previously had been but less well," said museum curator Philippe Costamagna.

The damage may not have all been the guard's fault. The seat of the chair had already been ripped about 30 years ago and was the subject of a shoddy repair, the museum said.

The chair is part of an exhibition "Napoleon in Camp" that details Napoleon’s life while he was on the road during his many military campaigns.

Though he's been dead nearly 200 years, Napoleon still pops up frequently in the French national consciousness. In December last year The Local reported how INSEE, the agency behind France's census was left red-faced after sending out a letter to the former emperor.