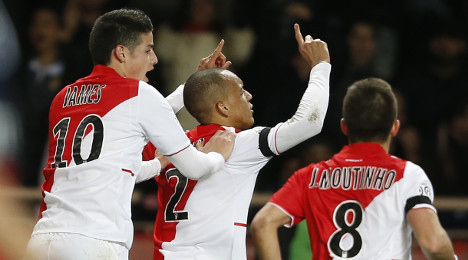 Monaco players celebrate after they scored an equaliser against PSG on Monday. Photo: Valery Hache/AFP

A Thiago Silva own goal denied Paris Saint-German victory at their closest Ligue 1 rivals Monaco on Sunday as the top two clubs in France played out their second 1-1 draw of the season.

The result left PSG still firm favourites to win a second consecutive title as they remain five points ahead of Monaco with 14 games to be played.

Monaco salvaged a point after PSG's captain Silva stretched and inadvertently turned a Fabinho cross into his goal in the 74th minute.

The result was probably a fair reflection of the match, but PSG will be the most disappointed as they had held the lead since the eighth minute through a headed goal by Javier Pastore.

"It was a good game with lots of chances," reflected Monaco manager Claudio Ranieri.

"I hope PSG will win the Champions League for French football, and leave a few points for Monaco…."

Lurking at the back post, Pastore, who was drafted into the PSG side as replacement for injured striker Edinson Cavani, was able to score from close range after a corner had been flicked-on from defender Alex.

Monaco's response to going behind was immediate and they should have been level just six minutes later, but Emmanuel Riviere squandered a great chance pushing a rebound from Sirigu wide with the goal at his mercy.

But it was not all one-way traffic.

PSG should have doubled their lead when Ibrahimovic, of all people, squandered a fine opportunity from just five yards out after good play on the left flank between Pastore and Maxwell.

The second-half was a more scrappy affair with PSG largely in control.

PSG came closest to scoring when Ibrahimovic fired in a fierce free-kick from the edge of the area which Monaco's Croatian keeper Danijel Subasic did well to turn wide in the 55th minute.

Both sides had a chance to secure victory in the final minutes.

First Fabinho was denied in the 89th minute from giving Monaco – who brought on former Fulham striker Dimitar Berbatov for his debut in the 64th minute – victory after his thunderous shot was well-saved by PSG's Sirigu.

Meanwhile, the chasing pack behind the top two teams mostly had a good weekend.

Lille, Marseille, Lyon and Reims all won with St Etienne the only side in the top seven not to get three points following a disappointing 0-0 at mid-table Toulouse.