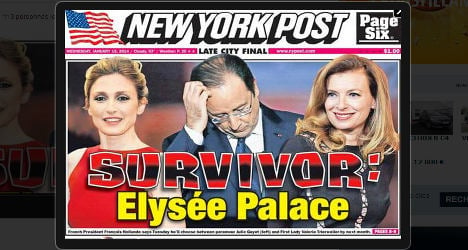 François Hollande is best known in the US for his alleged affair with a younger actress, thanks in part to headline's like this from the New York Post. Photo: Screengrab/New York Post

As Hollande arrives for a three-day visit to the US, a review of the American press on Monday showed that while there was some interest in his stance on business and the environment, it was the recent escapades in his private life that were making most of the headlines.

The US media's coverage of the affair, including the New York Post's front page story, pictured above, has helped raise the French president's profile in the US, if not quite for the reasons he might have been hoping.

Many American media sites, seen by the CBS news headline below, have focused their coverage on Hollande's private life and the knock-on effects for his solo trip to the US.

Even respected outlets like the New York Times couldn’t pass up the chance to lead on the fallout from his alleged affair with Julie Gayet.

The Times broke the news this weekend the White House had to destroy some 300 invitations to a state dinner on the occasion of Hollande’s visit because they had been printed before he dumped former “first lady” Valérie Trierweiler.

The invites, with the presidential seal in gold, included Trierweiler's name and had been set to be mailed before the story of Hollande's antics hit the headlines in January.

Prior to his much-publicized affair many Americans could maybe at least recognize the names of former presidents Nicholas Sarkozy or François Mitterand but the New York Times' White House correspondent Peter Baker doubted many of his countrymen were familiar with the name Hollande.

“A couple weeks ago nobody knew who François Hollande was,” Baker said. “The American public only learned about him because of the affair.”

American News channel CNN pointed out Hollande is not the first French president to fly solo at an official visit to the US. Hollande's predecessor Sarkozy paid a visit to the US shortly after divorcing his wife.

And it’s not the first time breaking news has disrupted the careful choreography of a state dinner. When the NSA spying scandal broke Brazilian President Dilma Rousseff cancelled her trip altogether.

Hollande heads to US to boost French economy

However, a slew of messy questions have been the subject of much stress for the White House social staff in recent days. Normally the spouse of the guest leader would sit next to President Barack Obama. So who will get that place? Also, should there be any dancing if Hollande has no one to dance with?

These questions are not so much prurient but of an important nature. State dinners at the White House, as other halls of power, are dominated by a series of protocols and delicate politeness. America and France go back a long way and thus a slip up could offend a key partner.

Some media outlets couldn’t let interest in Hollande’s private troubles pass by, but at least tried to inject some serious policy analysis into it. The New Yorker argued that the president’s alleged affair being outed by a new story was typical if his indecisive term in office.

“Many French now claim to see a pattern in Hollande’s behavior reflective of a general weakness in his Presidency. “He never decides anything. He lets events or other people decide for him,” one friend explained to me,” columnist Alexander Stille wrote.

And Hollande's affair has also been the talk of the "twittersphere" in the build up to the visit.

"Hollande is famous in Washington since the Gayet affair. With the DSK affair, the French must have a heck of a reputation," said one French tweeter.

Others were more mocking: