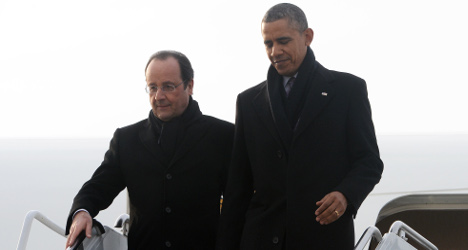 US President Barack Obama and his French counterpart François Hollande disembark from Air Force One in Charlottesville on Monday. Photo: Jewel Samad/AFP

The visit, designed to underscore historic ties and a burgeoning security relationship between America and its oldest ally, takes place as Hollande tries to shrug off speculation over his love life.

Obama met Hollande at the steps of a Boeing-757 version of his Air Force One jet at Andrews Air Force base, for a short flight into Virginia to visit Jefferson's beloved mansion at Monticello.

The visit was planned as a chance for Obama and Hollande, who speaks good English, to forge a personal relationship in highly symbolic surroundings.

The serious business will begin on Tuesday, with Oval Office talks likely to focus on the war in Syria, Iran's nuclear program, Ukraine's political crisis and security concerns in Africa.

Washington and Paris share a tough stance against Tehran and Damascus, and US forces provide intelligence and logistics support to the French operations in Mali and Central African Republic.

Hollande hopes to leave his split from long-time girlfriend Valérie Trierweiler behind, but her absence will be noted when he goes solo to Wednesday's state dinner in a plush marquee on the White House south lawn.

His trip is the first full state visit by a French leader since 1996 and is expected to highlight the "excellent working relationship" between the United States and France, according to sources at the Elysée.

But the pair will also discuss issues that have bedeviled relations, including concerns over mass US spying in France, and economic ties will also be on the agenda.

The leaders will hold a joint press conference at the White House after their discussions on Tuesday.

Jefferson, the third US president, served from 1801 to 1809 and was both one of the founding fathers of the United States and one of the country's first diplomats in Paris.

Monticello, about 120 miles (200 kilometers) southwest of the US capital, is a shrine to Jefferson's political and diplomatic career and his consuming passions for wine, history, science and literature.
On Tuesday night, the Obamas will host a state dinner for Hollande – an event that created a flurry of protocol confusion, as the French leader had initially been invited to attend with Trierweiler.
Hollande announced his separation after his affair with Julie Gayet, an actress nearly 20 years his junior, was revealed.
Ahead of their meetings, the two leaders issued a joint call for other nations to join them in seeking an "ambitious" agreement to curb climate change.
In a column published in the Washington Post and Le Monde, the presidents said their nations had overcome disagreements of the past, including over France's refusal to support the 2003 US-led invasion of Iraq under president George W. Bush.
"A decade ago, few would have imagined our countries working so closely together in so many ways. But in recent years our alliance has transformed," the presidents wrote.
"Alongside a revitalized alliance on the world stage, we're also working to deepen our bilateral economic relationship," they said.
Hollande, whose approval rating is the lowest of any modern French leader, is under intense pressure to give a boost to his country's ailing economy and find ways to create jobs.
To that end, he will head from Washington to California to meet with tech leaders in Silicon Valley.
The visit is Hollande's second to the United States since taking office, after a meeting in the Oval Office with Obama during a G8 and NATO summit in April 2012, shortly after his election.