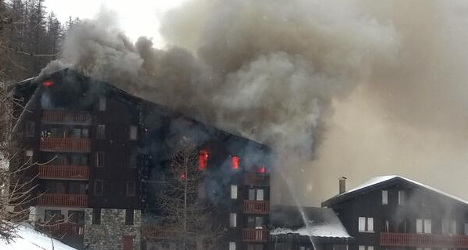 A fire tore through a ski lodge on Monday at the popular Val d'Isère resort near the Italian border. Photo: Deniz Unay/Twitter

A fire ripped through the fifth floor of the Les jardins de la Balme residence at Val d'Isère on Monday, forcing some residents to jump from windows to escape the flames and provoking evacuations.

No one died in the fire, but a woman in her sixties was seriously injured jumping from the fifth floor window of the block, which was home to about 40 seasonal workers, French paper Le Monde reported. Eight other people were transported to the hospital due to smoke inhalation.

About 200 people had to evacuate from buildings at the resort while firefighters battled the flames.

"Savoie: 80 people evacuated after a fire in a hotel in Val d'Isère," tweeted journalist Geoffrey Hulsens with a photo of the blaze.