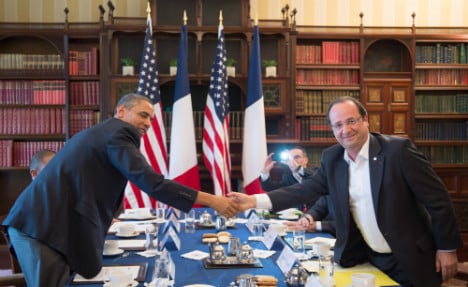 Hollande and Obama meet at the 2013 G8 summit in the UK. Photo: Bertrand Langlois/AFP

Deeply unpopular at home and fresh from a much-publicised split with longtime girlfriend Valerie Trierweiler, Hollande will be hosted for a state dinner and talks with President Barack Obama before jetting to California to meet tech leaders.

Sources in the Elysée say the trip will highlight the "excellent working relationship" between the US and France, but Hollande will also raise a few "irritants", including concerns over mass US spying in Europe.

Hollande and Obama are expected to discuss the war in Syria, Iran's nuclear programme, Ukraine's political crisis and security concerns in Africa.

France has played a leading role in African security since Hollande took office in 2012, sending troops to fight Islamist rebels in Mali and to stem unrest in the Central African Republic.

But much of the focus is expected to be on economic questions.

Hollande, whose approval ratings are the lowest of any modern French leader, is under intense pressure to revitalise the French economy and reduce an unemployment rate that is at a 15-year high.

After a red-carpet welcome at Andrews Air Force base on Monday, Hollande will attend a state dinner with Obama and First Lady Michelle, which French officials said was to take place "as planned" despite Hollande's personal woes.

The invitation had initially been made to both Hollande and Trierweiler, but the president will be attending alone after his split with the de facto French First Lady last month.

Hollande announced his separation from Trierweiler after revelations of an affair with Julie Gayet, an actress nearly 20 years his junior.

On Tuesday Hollande and Obama hold official talks at the White House followed by a joint press conference.

Paris and Washington have not always seen eye-to-eye, most famously when France opposed the Iraq war a decade ago, and this is the first full state visit by a French leader since 1996.

Some tricky issues are expected to come up, including the revelations of widespread spying by the US National Security Agency in Europe and eavesdropping on senior officials like German Chancellor Angela Merkel.

In an interview with Time Magazine ahead of the visit, Hollande said the revelations of "practices that should never have existed" had led to a "difficult moment" in US-European ties.

But Elysée sources said Hollande and Obama have a "good personal relationship" and are in "complete agreement on economic questions, with the accent on restarting growth and regulating finance".

On Wednesday he flies to Silicon Valley in San Francisco to see tech chiefs, including the heads of Google, Facebook and Twitter.

His talks there are likely to be prickly, after Hollande said Thursday that tax optimisation strategies used by Internet giants are "not acceptable".

France, which is reportedly seeking one billion euros ($1.36 billion) in tax from Google, has repeatedly criticised fiscal strategies that funnel revenues through intermediaries registered in low-tax havens like Ireland or Luxembourg.

In other events, Hollande will on Tuesday lay a wreath at the Tomb of the Unknown Soldier at the Arlington National Cemetery and decorate six World War II veterans.

The visit is Hollande's second to the United States since taking office, after a meeting in the Oval Office with Obama during a G8 and NATO summit in April 2012, shortly after his election.