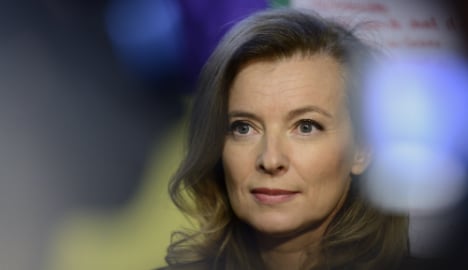 The former first lady announced the move in a statement to AFP.

The pictures of Trierweiler, 48, and two girlfriends relaxing in bikinis on the island of Mauritius hit newstands on Friday, four weeks after Closer revealed Hollande's affair with an actress, Julie Gayet.

According to Closer, the trio rented a luxury beach villa that costs upwards of $2,000 a night shortly after Trierweiler's return from a charity trip to India, which she made the day after Hollande ended their relationship.

During her trip to India, Trierweiler told journalists she had not ruled out writing a book about her time with Hollande.

The Socialist leader left the mother of his four children, Segolene Royal, for Trierweiler in 2005. According to Closer, his affair with Gayet began two years ago but it is unclear whether the relationship is continuing.

Hollande, who is due to visit the United States next week, has indicated that he will be a bachelor president for the time being while Gayet has let it be known she harbours no ambitions of becoming first lady.

Currently the most unpopular French president of recent times, Hollande's approval ratings ticked a notch higher after the affair was revealed but have since resumed their decline with the latest survey suggesting only 17 percent of voters think he is doing a good job.