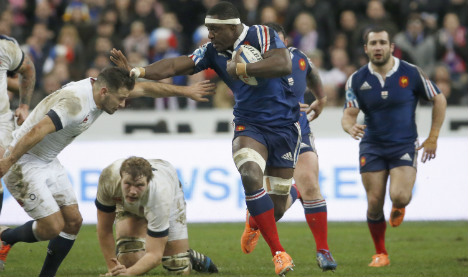 Their thrilling 26-24 victory over England last Saturday eased the pressure on coach Philippe Saint-Andre after a woeful series of Test results in 2013 which saw them beat only Scotland and Tonga.

However, they will meet an Italy side that are no longer the pushovers they were having shown that by beating both the French and the Irish in last year's Six Nations and giving two-time defending champions Wales a few scares before losing 23-15 in Cardiff last Saturday.

The task for the French will be to build on the positives from the England game, in which they showed great character to stay in contention as England spurned several chances to put the match out of sight in the second-half.

Saint-Andre, whose flamboyance as a player has not been replicated in the sides he has coached, has kept changes to a minimum as he and his staff bid to finetune their line-up ahead of the major goal — delivering their first ever World Cup trophy next year.

He has made three changes to the starting line-up, the most intriguing in bringing in Stade Francais fullback Hugo Bonneval, son of 18-times capped international Eric Bonneval, but on the wing.

"He is more accustomed to playing at fullback but I saw him play on the wing against London Irish (in the European Challenge Cup)," said Saint-Andre.

"He was exceptional and was named man of the match."

Bonneval, whose Stade Francais team-mate Jules Plisson starts again at fly-half after an impressive showing against England, gets the nod ahead of Gael Fickou, who must consider himself unlucky after scoring the late try against the English.

Saint-Andre, though, is more focussed on his side keeping their feet on the ground and suddenly thinking they are world beaters.

"We can't start swaggering about because we won one match," he said.

"We had a difficult 2013. On the contrary, we need to show the desire to improve, to be more effective and to build on last week by recording a second victory.

"We know that, in the Six Nations, there are no easy matches. The Italians showed us that last year (beating France 23-18 in Rome), and they posed a lot of problems to the Welsh in their first match."

Italy coach Jacques Brunel would sympathise with Saint-Andre about the fickleness and inconsistent habits of the French national side as he was assistant coach to Bernard Laporte from 2001 to 2007 but now he is ready to play on their weaknesses and give Italian rugby a real shot in the arm.

The 60-year-old has introduced new talent since he took over after the 2011 World Cup but has also retained experienced hands especially in the scrum where captain Sergio Parisse — teammate of Plisson and Bonneval — and tight-head prop Martin Castrogiovanni will equal the national record of 103 caps held by retired prop Andrea Lo Cicero.

Brunel — who was forwards coach under Laporte — said that based on history France were formidable opponents but his side could pull off a memorable victory if they play up to the standard they did in Rome last year.

"France are dangerous simply because of their past record, their history, including being World Cup finalists last time out," said Brunel, who experienced two World Cup semi-finals as France assistant coach both times being beaten by England.

"But I'm hoping we can look to last year's win in Rome for inspiration and that we can play to our full potential. If we play as I know we can, we have every chance of beating France."