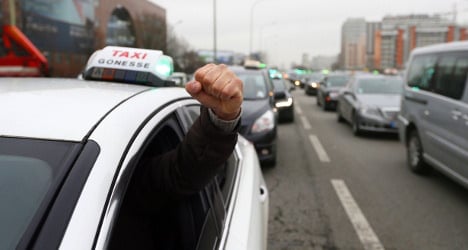 On Monday French taxi drivers are planning another go-slow protest between Paris’s airports and the city over their ongoing battle with private hire cabs (VTC), which cabbies say are providing unfair competition.

The last demonstration like this ended with groups of rogue taxi drivers smashing the windows of an Uber private hire car on January 13 as it carried passengers from Charles de Gaulle airport into the city.

The upcoming protest stems from a decision on Wednesday by France’s highest authority on administrative law, the Council of State (Conseil d’Etat), to suspend a rule that forced the private hire cabs to wait a minimum of 15 minutes after a reservation had been made, before picking up a fare. The national protest is set to start at 8am near Paris's two main airports.

The idea of the proposed law was to protect traditional cabbies who unlike private hire cab drivers can pick up a client any time and any place in their jurisdiction.

But the Council of State saw it as unfair to private hire firms and so scrapped the rule, which as you can imagine did not go down well with the country's fleet of taxi drivers.

"Taxi drivers are being swindled"

“In other countries there is one to three hours delay for private hire cabs. There are also hefty pick up charges: €90 in Spain $70 in the United States. We only had 15 minutes and yet the Conseil d’Etat figures it’s illegal and that it prevents them from working.”

“It’s totally atrocious. Taxi drivers are being swindled. The 15 minutes, even though VTC drivers didn’t honour it, allowed for some moderation.”

“Now the Conseil d’Etat has to decide whether they want to add time, subtract time or completely do away with the 15-minute limit. This could take months and months and in the meantime taxis are going to lose a part of their spending power.”

“To get set up as a self-employed taxi driver in Paris, you have to figure on spending about €150,000. There is training, the licenses, the car. But for the VTCs there is simply the cost of the car, and lord knows what kind of car it may be.”

“When you buy something, a flat, anything. Are you willing to sell it off for nothing? We have invested up to €250,000 to work, does it make any sense to sit back and let it collapse? No we are going to fight.”

“We did our own research and VTCs charge the same if not more than taxis. But they don’t have a meter, so they can charge whatever they want. Our prices are set by the government, we can’t choose our rates. We have to play by all the rules and they don’t.” As for the image of the gruff, surly cabbie, who visitors to Paris love to both fear and loathe, well it’s not fair representation, she said.

“It’s just a minority of Parisian taxi drivers who are not pleasant. I take a taxi every day and the drivers have no idea who I am, and they are always nice. There are 20,000 taxis in Paris, you’re not going to tell me they are all rude. Even though it’s not deserved the VTC drivers take advantage of this reputation.”

Annet said the 3,700 drivers in her union won’t take part in the protest called for Monday, which will see scores of taxis intentionally backing up the highways between Paris and its airports. She said she was turned off by an angry mob slashing the tires and breaking a window of an Uber car. (See link above)

“I don’t think so. We don’t agree with how they have gone about it. They are willing to do anything. We are against this kind of behaviour. We agree something must be done, but nothing violent.”

“Those who are willing do whatever it takes, they are the worst. They turn the public against us. And what happened last time – the violence –  that was what was seized upon by the media."

As for the news that Uber had launched a new ridesharing service called UberPop in Paris, Annet was similarly displeased. While Uber previously worked with a fleet of drivers who reported to the company, the new service allows almost anyone to get paid for driving other people around.

“This is the same problem as VTCs but worse. They do not have the right to work, at all, as a taxi.”

Do you have any sympathy for taxi drivers in Paris or elsewhere in France?