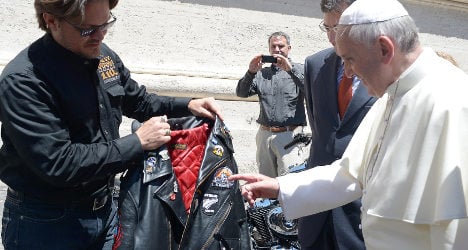 The 1,585cc Dyna Super Glide was given given to the pope in June to mark the 110th anniversary of the US motorbike maker, London-based auctioneer Bonhams said. But it is the pope's no more.

The sale for €241,500 blew away all predictions on how much the motorcycle would go for.

The pope donated the Harley in November to the Roman Catholic charity Caritas Roma and the funds from the sale will go towards the restoration of its Don Luigi di Liegro hostel and soup kitchen based at Rome's Termini railway station.

"We are incredibly honoured to be selling this item on behalf of Caritas Roma," said Ben Walker, head of motorcycles at Bonhams.

"We hope to be able to do both Pope Francis and Harley-Davidson proud by raising a significant amount of money for a very worthy cause."

Pope Francis, 77, is not thought to have ridden the Harley, a make well known for its use by motorbike gangs including the "Hells Angels".

The famously humble pontiff is more of a fan of buses. He opted to ride one the day after his election last year instead of taking a limousine, and regularly used them in his homeland Argentina instead of taxis.