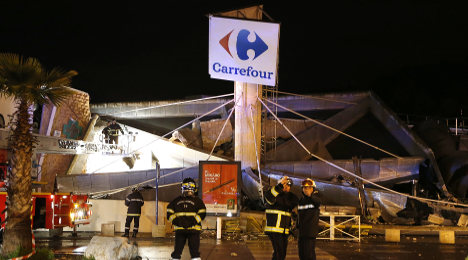 The image shows the roof of a Carrefour hypermarket having collapsed onto shoppers. Photo: Valery Hache/AFP

The image above shows firefighters stand at the scene in Nice, south-eastern France, where a section of the roof at a Carrefour hypermarket caved in,on Wednesday evening.

Incredibly the collapse of the 200 square metre section of roof, above a pharmacy, left just two people with minor inuries, according to the police.

"We are 99.99%, there is nobody else in the rubble,"  said Chief Warrant Officer Patrick Villardry.
The hypermarket was reportedly packed with shoppers at the time.
"It is a miracle that there have been no deaths," said Villardry.
The two who were injured were two women who worked in the pharmacy, directly beneath the part of the roof which collapsed.
Dominique Mounier, head of a local crane company estimated that there are "100 tons of rubble to clear," an operation that could take "several days".
Witnesses reported hearing a huge noise, before the roof collapsed.
Authorities have launched an investigation into the cause of the incident.