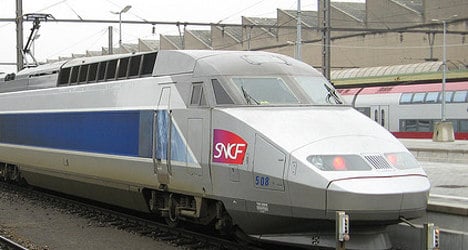 SNCF face being barred from bidding for contracts in the US over its role in the Holocaust. Photo: Bondonlane/flickr

American lawmakers in the state of Maryland have proposed a bill that could prevent SNCF from bidding for public projects on that side of the Atlantic until it makes restitution payments for its role in taking Jews to concentration camps during the Holocaust.

Two democrat lawmakers want compensation to be paid to Holocaust survivors and their families before rail company Keolis, which is majority-owned by SNCF, can bid for a €4.4 billion, 35-year contract, to build and operate a 16 km light rail project.

“The persistent refusal of SNCF to take responsibility for its role in the Holocaust remains an insult for its victims,” sponsoring Sen. Joan Carter Conway told French daily Le Monde.

Requisitioned by France’s Vichy regime in World War II, SNCF trains carried 76,000 Jews and other Nazi prisoners from 1942-1944 to the German border, where they were then transported to death camps.

SNCF affiliate Keolis is one of a handful of companies that have been allowed to bid on the rail project that would run between Montgomery and Prince George counties and is considered the largest of its type in Maryland’s history.

But before the process could proceed a Holocaust survivor Leo Bretholz caught wind of the SNCF’s involvement and launched an online petition to bar Keolis that garnered 50,000 signatures. The survivor’s effort pushed the senators to take up the issue.

The president of SNCF America Alain Leray told Le Monde the company would undertake a “critical reading” of the bill in search of “possible discrimination” against it that would favor other firms involved the bidding.

SNCF has formally expressed remorse for the Nazi collaboration and insisted it was forced by France's World War II German occupiers to help deport French Jews to the gas chambers. The company notes that 2,000 of its own rail workers were executed.

SNCF’s historic ties to the holocaust have already drawn ire on the other side of the Atlantic. In 2010 SNCF head Guillaume Pépy had to present a public apology in Florida where the company sought a rail contract to connect the cities of Orlando and Tampa.

In August US Senator Chuck Schumer led a bipartisan group of sponsors in introducing a measure that would make the railway culpable in American courts, and allow US victims to pursue lawsuits against the company.

The bill seeks to counter the SNCF's argument that it is immune to legal action thanks to the Foreign Sovereign Immunities Act. Similar legislation was introduced during the previous Congress, in 2011, but the measure stalled.

"Survivors and family members of those who perished have long attempted to hold SNCF accountable for its active role during the Holocaust, but so far the company has succeeded in cloaking itself in foreign sovereign immunity, evading jurisdiction in United States courts," Schumer said in a statement.