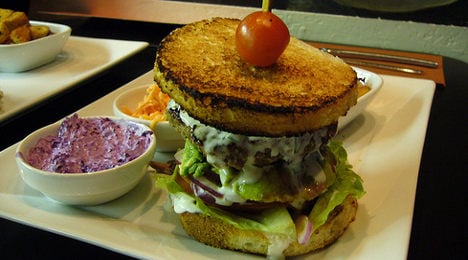 The hamburger may be a quintessentially American food, but it is fast winning over the French who increasingly choose a beef patty wedged into a bun over a traditional baguette sandwich.

Research by the Gira marketing and consulting firm found that nearly one of every two sandwiches sold in the country last year was a burger, up from one in nine in 2000.

Although the French are famously proud of the their cuisine, Gira found that burgers are making inroads into traditional restaurants.

Gira's director Bernard Boutboul said the firm found "seventy-five percent of traditional French restaurants offer at least one hamburger on their menu" and that a third of these cases burgers were out-selling steak or fish dishes.

The sales of burgers in traditional restaurants have soared by 40 percent in the last two years, Boutboul said.

While fast food chains such as McDonald's dominate the market, Gira found that restaurants accounted for a quarter of the 970 million burgers sold in the country last year.

It was an obvious next step for hamburgers to creep into traditional French dining, as the cheaper, lower quality fast food version has been booming in France.

“In the land of gastronomy, fast food has become the king,” wrote French magazine Le Point wrote last year, on the heels of a surprising report that showed fast food, raking in a whopping €34 billion in 2012 had for the first time outperformed the France's sacred sit down restaurant.

That figure represents 54 percent of the market and reveals a huge jump compared to 2011 when sales of burgers, hot dogs and pizzas etc represented 40 percent of the overall market.

The drive for dominance by fast food outlets has unsurprisingly been led by McDonalds, for which France represents the second largest market in the world after the United States.

The report also revealed the French are the second biggest consumers of pizza in the world after the US, eating a mammoth 1.6 billion a year and sales of sandwiches in France rose by 6 percent in 2012 to reach €7.01 billion as the French wolfed down over three million.

Just over 1.3 billion of  those sandwiches were the traditional 'jambon-buerre' (ham and butter), the price of which is used as indicator of inflation in France. In 2012 the average price of a jambon-buerre sandwich rose 1.5 percent but a boulangerie the prices were found to have risen 10.9 percent.