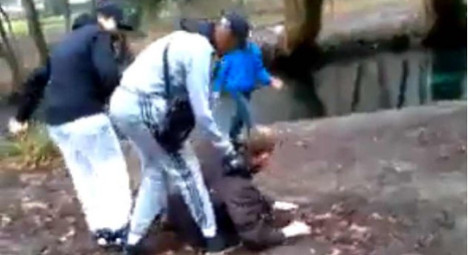 Theyouths are seen pushing the teenager with learning difficulties into the mud. Photo: Screengrab Facebook

First it was the video of a man torturing a cat that led to anger on Facebook in France and forced the French police to take action. This week it was a sickening film showing youths tormenting a young man with learning difficulties.

The film shows the youths, aged 14 and 15, take the young man to a park near the town of Fontaine, just outside the city of Grenoble.

The teenagers are seen pushing their victim into the mud, before throwing the hood of his jacket into a pond. They tell him to fetch the hood and push him into the shallow water, Le Parisien reported on Tuesday.

The victim does not speak through his ordeal and appears confused by what he is being made to do.

In the end he gets out of the water himself and walks away. Then one his aggressors speaks to the camera and explains their shocking actions, saving it was “revenge for the guys from Villeneuve”, whom the victim had apparently landed in trouble.

“Now we start from scratch. We are even,” the youth says to the camera.

After the video was posted online, it was not long before Facebook users took their own revenge against the callous attackers.

By Monday evening it had been shared thousands of times among shocked social networkers, prompting 6,500 comments, Le Parisien reported.

A petition calling for them to go to prison for the attack on the teenager quickly gathered over 14,000 signatures. Outrage at the attack was not confined to Facebook, with government ministers speaking out to express their own anger.

Minister for the disabled Marie-Arlette Carlotti denounced the video as “terribly shocking because of the shame of the perpetrators and the vulnerability of the victim.”

“The alleged perpetrators have been publicizing their crime, no doubt thinking they would go unpunished, that their actions have no consequences for themselves. They are mistaken. Justice will shed light on this matter and take appropriate sanctions,” she added.

Police, fearing that angry members of the public, would take the law into their own hands and seek retribution were forced to act quickly.

Two teenagers aged 14 and 15 were arrested on Monday after police managed to identify the victim. They remain in police custody.

Authorities are still hunting for two other youths seen in the video.