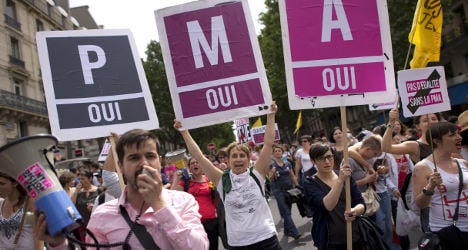 Backers of same sex couple slammed the government on Tuesday for backing off a proposal to legalize practices like surrogacy. Photo: Lionel Bonaventure/AFP

Conservatives in France were heralding a victory on this week after President François Hollande’s administration announced it was delaying until at least 2015 a proposal to legalize "medically assisted procreation" (known as PMA in France) and surrogacy for same sex couples.

But, in the opposite corner, the decision has drawn harsh condemnation from gay and lesbian groups.

Rights group Inter-LGBT denounced the “major political cowardice of the government and the president,” according to a statement.

They went on to say Hollande’s government “doesn’t take responsibility for its commitments, from which it has pulled back with an incredible series of back peddling moves over the course of several months,” the statement said. “This umpteenth climb down illuminates the government’s disdain for all lesbians.”

Hollande’s administration announced on Monday it was postponing its plans to move ahead with legislation that would have legalized medically assisted procreation, like IVF, for lesbians, and tackled issues like surrogacy.

Left wing politicians also seized on the government’s about face as a great failure.

“The left has been deceived,” Far-left firebrand Jean-Luc Mélenchon told the AFP. “I call for elections that will inflict severe punishment on the government.”

“It looks a lot like capitulation in the face of demonstrations from France’s most reactionary people. It is truly a tragedy for the numerous families that were expecting reforms,” Namère told BFM TV. “To give in this way after demonstrations, it’s an expression on the part of the government of its fragility and vulnerability.”

The apparent climb-down came a day after tens of thousands of protesters marched through the streets of Paris and Lyon calling for the law to be dropped and denouncing Hollande for attacking traditional family values.

But goverment spokeswoman and Minister for Women's Rights, Najat Vallaud-Belkacem categorically denied the law was being put off because of a conservative backlash.

"We would never push back this bill in light of a demonstration. We have delayed the examination of this bill because it was in fact not ready," she told France TV. "The hysteria around this bill, notably the demonstration (on Sunday) is based on fantasies and imaginary fears that have turned the debate hysterical."

Hollande’s government enraged conservatives by pushing through the legalisation of gay marriage last year. Debate over the law sparked intense and at times violent opposition and criticism from the powerful Catholic church.

Over 70,000 gay marriages have since taken place but it emerged on Tuesday that Vincent Boileau-Autinone, who along with his partner was the first gay couple to marry in France was sent death threats on Twitter after speaking out against the demonstrators on Sunday. Boileau-Autin said he has filed a formal complaint over the threats.