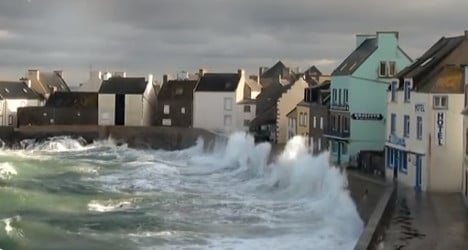 Gale force winds are set to pound the Brittany coast on Tuesday and into Wednesday just as the region tries desperately to get its breath back after the weekend storms.

The country’s meteorological service Météo France has reacted by placing three departments in the western region (Cötes-d’Armor, Finistère and Morbihan) on Orange alert – the second highest level for weather warnings.

The first gales, which are forecast to reach over 140km/H are expected early on Tuesday afternoon and will continue until the early hours of Wednesday morning.

The winds are set to be strongest around the more exposed coastal areas.

Météo France is also predicting more rain which will swell rivers where water levels are already high and could cause flooding in coastal areas where there are also risks of high seas and giant waves causing flooding.

Brittany has had one of its toughest winters, with storm after storm piling into the region from the Atlantic since Christmas.

The government and local authorities have been left with a clean-up bill that is believed to total several million euros.

This video shows the devastating power of the sea during the storms last weekend.

The western department of Les Landes has also been placed on Orange alert for floods for the next 48 hours.