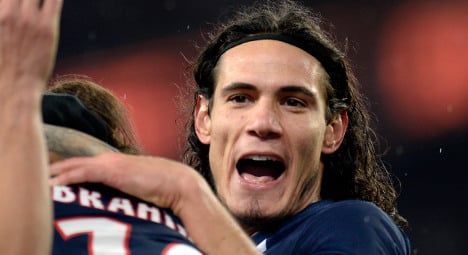 Edinson Cavani will be out for a number of weeks, but PSG may not need him. Photo: Martin Bureau/AFP

Lille were left hanging on to a Champions League place by a single point following their 1-0 defeat at Nice on Sunday.

Later, former multiple champions Lyon fell 2-0 at Rennes and Marseille were held 2-2 by Toulouse at the Velodrome.

Saint-Etienne's 3-0 success over struggling Valenciennes on Saturday had put the pressure on Lille but the 2011 champions failed to respond.

Former Paris Saint-Germain forward Mathieu Bodmer scored the only goal with a cute back-heel in first half stoppage time, although there was a suspicion of offside.

The defeat could have been worse for Lille but for Rio Mavuba clearing a Dario Cvitanich header off the line and Idrissa Gueye getting away with what appeared a blatant handball inside the Lille box.

Lille coach Rene Girard said: "We were inefficient, that sums up the way we played against a Nice side that appeared vulnerable.

"They didn't really put us in danger, but we conceded a goal at the worst moment."

At the turn of the year, Lille were challenging the top two, PSG and Monaco, but they have now dropped to 13 points off the summit after earning just two points from their last five matches.

"I don't seen any option for us but to work, the boys are already working well, but we must be vigilant and careful," Girard added.

Marseille remained in fifth, on 36 points, after their stalemate at home.

Twice Marseille went ahead, through goals by Dimitri Payet and Mathieu Valbuena, and twice they were pegged back.

Toulouse striker Wissam Ben Yadder levelled on 11 minutes with Serge Aurier ensuring they went home with a point on the hour.

Lyon, who pitched up seeking a fourth straight league win, had a torrid time of it at Rennes.

They went down a man when Samuel Umtiti was red carded for an ill-judged tackle on Romain Alessandrini three minutes from the interval.

Rennes were already leading at that stage thanks to Cedric Hountondji's 22nd minute header and new signing, Swedish forward Ola Toivonen, doubled up with less than half an hour left.

On Saturday Monaco saw their championship chances dented on Saturday as they were forced to come back twice before snatching a 2-2 draw at Lorient to fall five points behind Paris Saint-Germain.

Claudio Ranieri's men as the visitors were staring down the barrel of defeat with time running out.

Lorient, who came into the match in 10th spot and within touching distance of the European places, took a shock lead on 13 minutes when Monaco failed to clear a corner kick.

Kevin Monnet-Paquet picked up the loose ball following a poor clearance and whipped in a cross that Cameroon striker Vincent Aboubakar met with a firm header to beat Croatian 'keeper Danijel Subasic.

However with half-time looming, Ranieri's men equalised on 41 minutes thanks to a clinical finish from Valere Germain.

Emmanuel Riviere was the catalyst as he broke into the penalty area before laying off a perfect pass for Germain who made no mistake from close range.

The second half provided a more balanced affair with both teams struggling to create clean scoring chances before Jeremie Aliadiere appeared to grab the winner with 17 minutes left.

The striker who began his career at Arsenal before spells at Celtic, West Ham, Wolves and Middlesbrough banged the ball home from a rebound to pile the pressure on Monaco before Kurzawa came to their rescue.

Monaco now know next Sunday's home clash against Paris Saint-Germain is a must-win situation with their deficit increased to five points after the leaders defeated Bordeaux 2-0 on Friday.