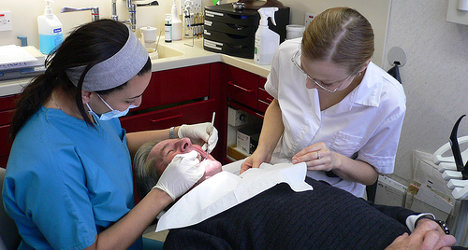 French dentists are set to be on strike on Monday. Photo: Herry Lawford

The main dentists' union called the strike in protest against a freeze in their tariffs by France’s state health insurer’s l’Assurance Maladie. They are also calling on the government to foot more of the bill for certain kinds of dental treatment and increase their pay for run of the mill procedures.

“The mobilisation will be widespread, many dentists are prepared to go on strike, even if you have to think about the patients,” Catherine Mojaisky, president of the main dentist’s union CNSD told AFP.

Many patients will only be made aware of the industrial action by a message left on the answer phone of their dentists which will explain the reasons for the strike.

Like most medical treatment in France patients have to pay up front, with part of the bill reimbursed by the state and the rest of it normally covered by a private insurance company known as a "mutuelle".

Dentists argue that the state should be reimbursing more of the cost of treatment and say their strike is acting in the interests of the patients.

They say the rates they are paid for carrying out certain procedures have not changed for 25 years and are now well below the market rate.

Last year a study by a French consumer group highlighted the rising cost of certain dental treatments, saying dental care was becoming a luxury in France.

The report, by the group "60 Million Consumers" accused dentists of abusing the system by charging way over the odds for treatment.

Not mincing it’s words the report talked of “fraud” and “unacceptable abuses” on the part of dentists, pointing to the fact some of them are charging 86 percent higher for the removal of a wisdom tooth than the recommended price laid down by the 2006 Dental Convention.

They are also opting to offer patients the most expensive form of treatment despite cheaper options being available, the report claimed.

Dentists themselves blamed the rise in costs on the freeze in their tariffs, which left them having to hike up their own add on charges, known as "dépassements d'honoraires"

Like doctors, dentists in France are allowed to go on strike but the authorities have the right to force them to work to ensure vital services are provided.