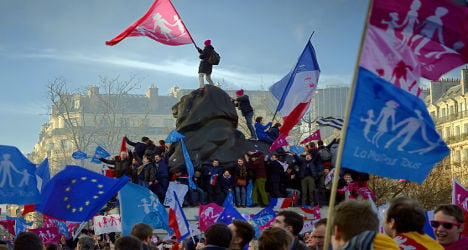 France's Socialist government on Monday put off plans for a new family law after demonstrations by thousands of angry conservatives.

Hollande’s administration announced on Monday it was postponing its plans to move ahead with legislation that would have legalized medically assisted procreation for same sex couples, and tackled issues like surrogacy.

A source in Prime Minister Jean-Marc Ayrault's office said the government would no longer present a bill this year that officials had said was aimed at modernising the law to reflect the new "diversity" of families.

The head of the government's Green Party coalition allies, Emmanuelle Cosse, urged the Socialists to reconsider.

"This renunciation, a day after the mobilisation of the reactionary camp, is appalling," Cosse said.

A source in the prime minister's office told AFP that "preparatory works" were still underway for the family law but that the "dense parliamentary calendar" would not allow it to be presented this year.

The delay comes at a crucial time for President Francois Hollande's deeply unpopular government, ahead of municipal elections next month and European Parliament elections in May.

French politicians provided no timeline for when the law will be put before parliament.

The about face on Monday comes less than a year after intense and at times violent protests over gay marriage. Despit the backlash from the opposition right and a powerful Catholic Church same sex unions were legalized in May 2013.

In all 7,000 gay and lesbian couple tied the knot last year. Same-sex unions made up around three percent of the total number of 238,000 marriages registered in France in 2013, the Insee statistics agency said.

The first gay marriage in France was held on May 29 in the southern city of Montpellier, which has a gay-friendly reputation. But many die-hard conservatives have continued to oppose the measure.

Recent protests have been partly driven by claims that new modules being introduced in junior schools will result in children being encouraged to reject gender identities.

The government has dismissed the claims as scaremongering by fringe activists.

UKRAINE
Thousands gather in Florence and Paris to show support for Ukraine
Url copied to clipboard!