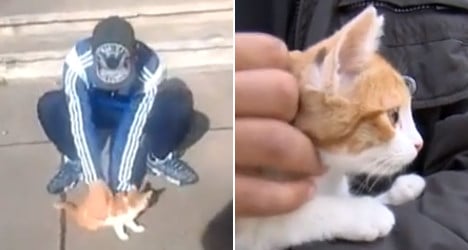 Left a man is just about to throw Oscar into the air as high as he can. Right the kitten in the arms of someone a lot more caring. Photo: BFMTV

The video, which has now been removed from YouTube, sparked furore last week after thousands of viewers were outraged after seeing the man throw Oscar as high as he could against a block of flats.

Meowing, the little ginger and white kitten, named Oscar is then seen falling four or five metres away.

Before being sentenced to a year in prison in a Paris courtroom on Monday the defendant Farid Ghilas, 24, of Marseille, apologized for the attack.

"I don't know what came over me," he said, according to French newspaper 20 Minutes. "I was an idiot. I'm sorry."

Outside of the courthouse over 200 animals rights supporter and 20 dogs had appeared in support of the charges, which was no surprise given the massive, angry reaction from the French public. News of the sentencing even drew breaking news alerts from high brow French papers like Le Monde and Le Figaro.

A petition signed by some 40,000 outraged animal lovers and calling for the man's arrest was sent to France’s Justice Minister Christiane Taubira and Interior Minister Manuel Valls..

In the petition, the ministers are urged to “establish a radical law against barbarity to animals, and to severely punish those who torture innocent animals”.

On Friday morning a 24-year-old man was questioned by police in Marseille. He was charged and will go before a judge in the city on Monday.

The Brigitte Bardot Foundation, an animal rights foundation founded by the former actress and singer, lodged its own complaint against the suspect and has raised the alarm about the number of these types of videos appearing online.

According to the Foundation, they have had to deal with many cases of mistreatment of animals but none as harrowing as this.

“Lots of people were very affected by these images. The impact – justified – of this video is very strong,” Christophe Marie, spokesman for the Brigitte Bardot Foundation told BFMTV.

If found guilty, the man faces up to two years in prison and a €30,000 fine, newspaper 20-Minutes reported. Police are also looking for the person who filmed the images.

Fears had grown for Oscar’s welfare. He had been missing since the videos emerged, but thankfully over the weekend he was tracked down. The little moggy is alive and well, although has been left with two broken legs and is still suffering from shock.