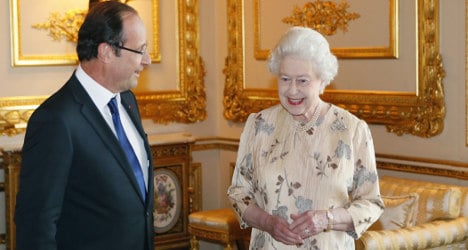 Queen Elizabeth II will pay a state visit to France in June to mark the 70th anniversary of the D-Day landings. Photo: Patrick Kovarik/AFP

Queen Elizabeth II and her husband Prince Philip will make a state visit to France to mark the 70th anniversary of the Normandy landings, Buckingham Palace confirmed Monday.

The royal couple have heavily reduced their overseas travel and the trip in June will be the first time that the 87-year-old monarch has left Britain since visiting Australia in October 2011.

"The Queen, accompanied by The Duke of Edinburgh, will make a state visit to France from June 5-7," Buckingham Palace said in a statement. They are visiting on the invitation of French President Francois Hollande, who held a summit with British Prime Minister David Cameron at an airbase in southern England on Friday.

The queen and her 92-year-old husband will attend events in Normandy, on the northern French coast, to commemorate the 70th anniversary of the D-Day landings on June 6.

Later that day and on June 7, the royals will attend state visit events in Paris and be received by Hollande at the Elysee Palace, his official residence.

Queen Elizabeth first visited France in 1957. Her most recent state visit across the Channel was in April 2004. She also visited in June that year for the 60th anniversary of the Normandy landings.