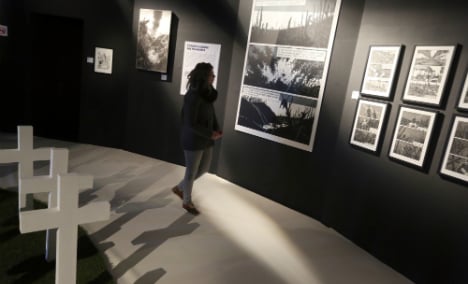 Japan's ambassador to France, Yoichi Suzuki, said he "deeply regrets that this exhibition is taking place", saying it promoted "a mistaken point of view that further complicates relations between South Korea and Japan".

Up to 200,000 women from Korea, China, the Philippines and elsewhere were forced into brothels catering to the Japanese military in territories occupied by Japan during World War II, according to many mainstream historians.

Franck Bondoux, director of the Angouleme International Comics Festival in western France, told AFP that Japan had not asked for the expo to be cancelled.

South Korea's Gender Equality and Family Minister Cho yoon-sun was present at the opening of the South Korean exhibit, entitled "The Flower That Doesn't Wilt", on Thursday.

"The subject was proposed by the South Korean government but the artists were completely free to evoke the subject independently," Bondoux said.

The politically-charged issue of comfort women has stoked regional tensions, with South Korea and China insisting that Japan must face up to its World War II-era sexual enslavement of women from across occupied Asia.

But in remarks in 2007 that triggered a regionwide uproar, then-Prime Minister Shinzo Abe said there was no evidence that Japan directly forced women to work as sex slaves.

Last week, the Japanese government distanced itself from remarks by the head of the NHK public broadcaster, who had said the Japanese Imperial Army's system of wartime sex slavery was commonplace "in all countries during war".

Katsuto Momii later apologised for "causing trouble" with the statement.

The French regional Sud Ouest daily newspaper received a petition, ahead of the festival's opening, from Japanese women indignant at the South Korean exhibit.

On top of the comfort women row, the festival's organisers shut down the booth of a Japanese association that displayed revisionist WWII content and swastika images among the comics on display.