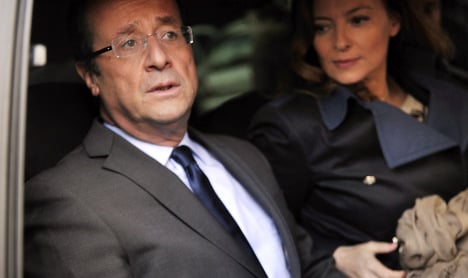 Hollande announced last week he was splitting from his partner Valerie Trierweiler following media reports that he was having an affair with actress Julie Gayet.

At a press conference following a summit between Hollande and British Prime Minister David Cameron at an airbase in southern England, Christopher Hope, a journalist from The Daily Telegraph newspaper, was handed the microphone.

After first asking a question about the economy, Hope added: "Do you think your private life has made France an international joke, are you still having an affair with Julie Gayet and do you wish she was here?"

Hollande replied: "As for the other question you asked, I will not answer you."

The nature of the question drew an angry response on Twitter from Axelle Lemaire, a French Socialist lawmaker who represents the French population of Britain and other countries in northern Europe.

Lemaire blasted the question as "disrespectful and discourteous", triggering a debate about freedom of expression.

In response to other British journalists who defended their colleague,

Lemaire tweeted: "Who is your Head of State here? The Queen. What if a French journalist asked her a question in the same way?"

British political journalists had reacted with indignation towards their French counterparts when they failed to bombard Hollande with questions about his private life at a press conference in Paris earlier this month after allegations of the affair appeared in a French magazine.