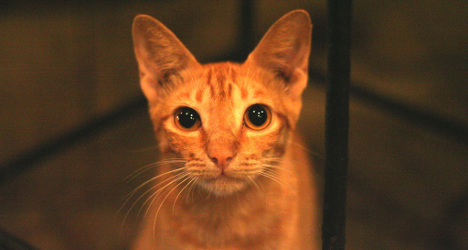 This is not the cat in the story. File photo: Paolo Marco

In the video, which has now been removed from YouTube, a young man is filmed throwing a cat at arm’s length against a block of flats. Meowing, the cat is then seen falling four or five metres away.

Since the video was posted on the popular video-sharing website, outraged comments have spread across the internet, BFMTV reported.

On Thursday a petition signed by some 40,000 outraged animal lovers was sent to France’s justice minister Christiane Taubira and interior minister Manuel Valls, calling for the man’s arrest.

In the petition, the ministers are urged to “establish a radical law against barbarity to animals, and to severely punish those who torture innocent animals”.

The Brigitte Bardot Foundation, an animal rights foundation founded by the former actress and singer, confirmed that legal proceedings are in progress.

On Friday morning a 24-year-old man was questioned by police in Marseille and is now being held in custody, according to BFMTV.

According to the Foundation, they have had to deal with many cases of mistreatment of animals but none as harrowing as this.

“Lots of people were very affected by these images. The impact – justified – of this video is very strong,” Christophe Marie, spokesman for the Brigitte Bardot Foundation told BFMTV.

The cat has not yet been found.

This isn’t the first time a video has led to arrest for mistreatment of animals.

In August 2013, a jogger in the southern Italian town of Lecce was arrested after he was captured on camera flinging three puppies across the street.