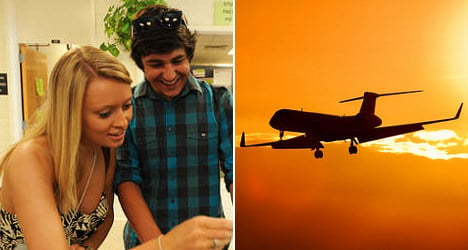 Where, why and for how long are French graduates going abroad? Photos: Tulane PR/Kusterand Wildharbor Photography

Twenty-seven percent of young French graduates imagine their careers beginning on foreign shores, according to a new study by the international firm Deloitte.

Although the number of graduates packing their bags and heading to the airports is consistent with last year's figures, but showed an increase compared with 2012 in which 13 percent said they could imagine looking abroad for work.

But who are these graduates, where are they going and will they ever return?

According to RTL, which published the results of the survey on Thursday,  the majority of these students are at PHD level or from the prestigious Grandes Écoles.

Canada was found to be the most attractive destination, followed by the United States, Great Britain and Australia, the study found.

Almost half of these graduates (44 percent) imagine themselves staying there between one and five years, and 11 percent said they would stay less than a year.

Worryingly for France, 28 percent said it would be a one-way ticket, at least for the duration of their career, according to the survey.

So what has spurred this desire to up sticks and quit their homeland?

For 33 percent, it was the disappointing career prospects in France that propelled them to the exits.

Perhaps surprisingly, over a quarter (26 percent) said they would quit France because of the low quality of life.

The latest statistics on expat graduates come in the same week figures were released which showed that France's jobless rate has hit a new record high, with 3.3 million out of work – roughly 11.1 percent of the workforce.

The figures come in spite of François Hollande’s pledge to reverse the trend by the end of 2013.