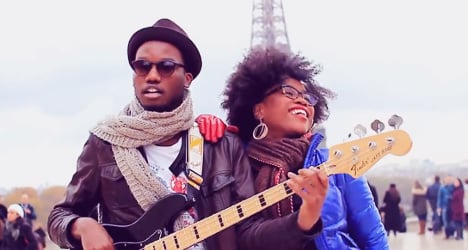 Two months after US rapper Pharrell Williams released the video for his hit single “Happy”, the song has spread like wild fire across the globe, with several copycat versions appearing on YouTube in towns as far afield as Abu Dhabi and Warsaw.

Several remakes have appeared in France since the single was released last November including in the towns of Albi, Angers, Boulogne, Grenoble, Laval, Lyon, Paris, Strasbourg and Toulouse.

In the Albi remake, which is one of the latest clips, residents are seen dancing in front of the town’s landmarks, including the Sainte-Cécile Cathedral, the town’s skate park and the marketplace.

The video took three days to shoot, according to regional daily La Depeche and since it was uploaded on Saturday it has clocked up some 51,000 views.

In a similar tribute, the Toulouse bar La Couleur de la Culotte released their own remake filmed in the city streets. According to La Depeche, the filming took at least ten days and 52 extras, including friends and clients of the bar.

In Paris at least five remakes were listed, including a clip by the city’s ESG Management School.

Meanwhile, several other towns across the world have filmed their own remakes. On Wednesday the French-speaking Swiss city of Lausanne became the first in Switzerland to upload their remake onto YouTube.

Advertised as being “the world’s first 24-hour hour music video”, William’s original video consists of a four-minute song featuring Pharrel and various people dancing and miming along in Los Angeles.