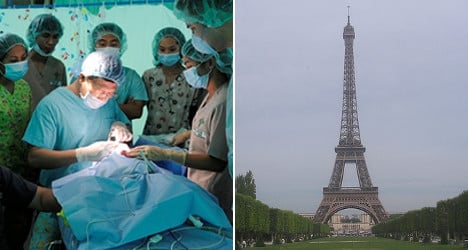 If you thought it was tough to find a job in France, it’s apparently worse in China and pushing many to take drastic action.

With millions of young people encountering stiff competition to get on the career ladder that they are turning to plastic surgeons to transform their noses, supposedly into the shape of the Eiffel Tower, AFP reported.

“We are influenced by the beauty of Eiffel Tower, we are not content to just add something to the nose, we reconstruct it,” Surgeon Wang Xuming told wire service AFP. He carries out dozens of the operations each month.

Students are willing to go under the knife because they are facing a ridiculous amount of competition when starting their careers. According to the latest figures a record seven million students graduated from college in 2013. This comes as even China’s economy has been slowed down by the global economic crisis.

Ads for the surgery are popping up everywhere.  On one of the posters you can see a young western woman with light-coloured eyes and a straight nose, a stereotypical beauty, who is pictured with the elegant curves of Paris’s most recognizable monument. But the €7,200 operation only leaves the patient with a nose that vaguely resembles the contours of the famous Iron Lady.

“It’s a classic monument, with an extremely aesthetically pleasing form, and we are trying to combine medicine with art,” an administrative worker in Wang’s practice told AFP. “We hope this nose will become classic and will provoke the same feelings at the Eiffel Tower.”

The nose surgeries are part of a 40 percent spike in plastic surgery among the Chinese in recent years, who believe a certain look will help them find a job. It’s not something they have imagined, employment ads sometimes specify certain physical characteristics like weight.

Xu Yang, a 26-year-old student in museology in Pekin, admitted she got liposuction in large part because she believed it would help her find work.

“I was too fat. After the operation, I though it would be easier to find a job,” she said. “Sometimes recruiters pay more attention to your appearance than your experience.”

Wang's clinic, not to be outdone in its marketing efforts, also has plans to take two young women who have gotten an 'Eiffel' nose job to Paris in order to have their photos taken with the real thing.