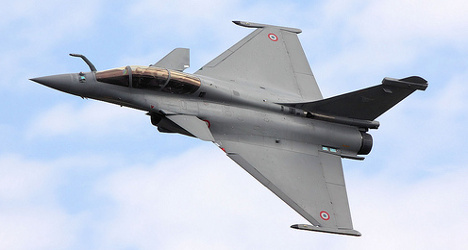 Despite the seemingly endless stream of bad economic news for France, there is at least one sector that’s booming: weapons. French arms makers confirmed €6.3 billion in orders to foreign countries in 2013, which represents a 31 percent jump on the previous year.

The figures released on Wednesday by the Ministry of Defence ensure France keeps its spot at number four among the world’s largest providers of weapons. The United States, the United Kingdom and Russia all sold more weapons than France in 2013.

For France the biggest orders came from Saudia Arabia and the United Arab Emirates, with about 40 percent of deals being inked in that region. According to the Ministry of Defence, “2013 marked a return to the Middle East.” South East Asia accounted for 16 percent, North Africa contributed 11 and South America added nine percent to French defence industry sales.

Buyers were ordering everything from helicopters, communications satellites, fighter jets, missile systems and frigate modernization programs from defence contractors that include Thales and MBDA. Thales alone reeled in €1.5 billion in orders from the Middle East.

The news comes as France struggles with record-high unemployment at 11.1 percent, mounting government debt and a generally gloomy outlook on what will become of the country in 2014.  But the Ministry of Defence is hoping its arms industry will be a bright spot.

If France closes ‘the mother of all defence’ deals this year with India for 126 Rafale fighter jets it could be a good year indeed. The would-be order is estimated to be worth over €9 billion, or a third more than all the deals France signed in 2013.

But the negotiations have dragged on for years, presently there is a dispute over who would be responsible for building the planes in India. The Rafale's maker Dassault has agreed to license part of the production to an Indian firm, but for now doesn't want to be responsible for problems with planes made on the subcontinent.