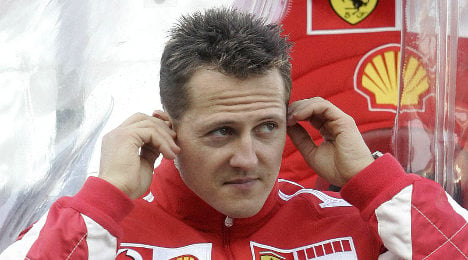 Doctors have begun taking Formula 1 legend Michael Schumacher out of a medically-induced coma, four weeks after an off-piste fall in the French Alps left him with serious head injuries, Sports daily L'Equipe claimed on Wednesday.

L'Equipe reported that Schumacher has “reacted positively” to the process begun this week at the CHU hospital in the south west city of Grenoble, where he’s been since the December 29 fall at the Méribel resort in the French Alps.

It's the first news on his condition in a weak, when his spokesman said he was still in a critical, but stable condition.

“I must re-emphasize that all declarations made about Michael’s health that don’t come from his medical team or his management, are mere speculation,” Kehm’s statement said according to French newspaper Le Dauphiné.

"Michael's condition is still considered as stable," Sabine Kehm said of Schumacher, who has been in a medically-induced coma since his life-threatening off-piste fall in the French Alps.

"I also repeat that Michael's family is very happy and confident with the work of the team of doctors treating Michael, and they trust them completely," Kehm said.

Investigators probing the crash have ruled out faulty skis, inadequate signage and excessive speed as reasons for the accident, in which he slammed his head against a rock.

Schumacher appears to have skied on a partially covered rock, lost his balance and fallen on another rock further down, according to the prosecutor in charge of the probe.

The impact was so strong it split his helmet in two.

The accident in the posh French resort of Meribel has shocked Schumacher's legions of fans and devastated his wife Corinna and two teenage children.

Schumacher dominated Formula One before retiring in 2012, winning more titles than any other driver and enjoying 91 Grand Prix victories between 1994
and 2004.