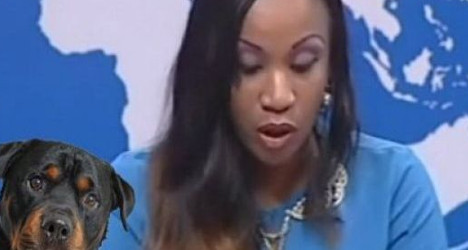 Oops! A newsreader made a blunder by referring to Hollande's former partner as "Valérie Rottweiler" and not by her real name Trierweiler. Screengrab: Dailymotion

Journalists have a reputation for being insensitive at times, but surely the words of one news reader in Gabon was taking it too far.

After French President François Hollande had dumped his former partner Valérie Trierweiler, a newsreader for Gabon Television relayed the report to viewers but referred to the former "first lady", not as Valérie Trierweiler but "Valérie Rottweiler".

The blunder has of course lit up social media networks around France on Tuesday.  The most obvious explanation for the gaffe is that the newsreader had a simple lapse of concentration by referring to the former partner of the president by the nickname that was given to her by critics.

Trierweiler was dubbed “Rottweiler” after saying in April 2012, shortly before Hollande was elected that “I have a character, they cannot muzzle me”.

She then proved her point by tweeting her support to a rival election candidate of Hollande’s former partner Ségolène Royal.

Speaking at a press conference during her trip to India on Monday, the 48-year-old Trierweiler displayed no apparent bitterness over the end to her time at the presidential palace, which came after allegations that Hollande has been having an affair with an actress.

"I was there [in the palace] for 19 months and I think I came to know people I didn't know before and even a part of me which I was unaware of. I won't be the same after this experience," she said.

Trierweiler also said that it had never crossed her mind to cancel the trip despite the fact that Hollande only announced their separation a day before her departure.

Trierweiler is expected to fly back to France on Tuesday night.