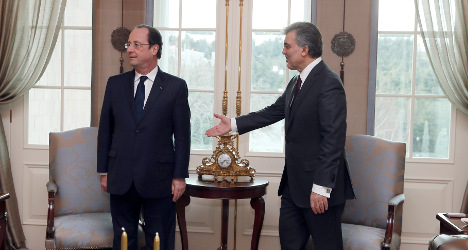 President François Hollande, left, visits Turkish President Abdullah Gul in Turkey but will he be open to Ankara's wishes to join the EU? Photo: Alain Jocard/AFP

French president François Hollande vowed on Monday to hold a referendum on whether France should support Turkey's bid to enter the European Union.

"No need to stokes fears. The French people will any case be consulted," Hollande said during a press conference with his Turkish counterpart Abdullah Gul on his first day of a state visit to Turkey.

Earlier had Gul asked France not to block Turkey's bid for EU membership as his French counterpart Francois Hollande arrived in the country for a state visit.

Hollande  will know the chances of the French voting in favour of Turkety joining the EU appear slim. In a recent poll published by Ifop, 83 percent of French respondents were against Turkey joining the Union. The chief reasons given for voting "No" were the country's cultural differences, religion and an unfdavourable economic situation, Le Parisien reported.

Hollande's two-day visit is the first by a French head of state in 22 years and reflects a thaw in ties that were frosty over France's stance on Turkish accession to the EU and the genocide of Armenians.

It is also his first trip abroad since his dramatic announcement that he had split from his longstanding partner Valerie Trierweiler.

Upon arrival in the capital Ankara, Hollande attended a wreath laying ceremony at the mausoleum of modern Turkey's founder Mustafa Kemal Ataturk before meeting his Turkish counterpart Abdullah Gul.

Hollande's goal will be to try to fix damaged political and economic ties with France's NATO ally, bringing with him seven ministers and a 40-strong delegation of business leaders.

"We expect this visit to give a new impetus to French-Turkish relations with the European Union," foreign ministry spokesman Levent Gümrükçü told AFP.

And they hit an all-time low after French lawmakers passed a bill in 2011 making it a crime to deny that the mass killings of Armenians by Ottoman Turks during World War I constituted genocide.

Although the legislation was later declared invalid by France's constitutional court, it severely damaged business ties.

Hollande, the first president to visit Turkey since Francois Mitterrand in 1992, is on a mission "to put things right", according to his entourage.