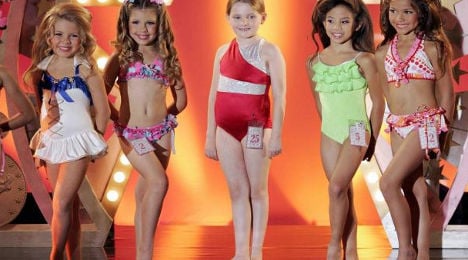 A scene from the film Little Miss Sunshine, which focusses on the type of child beauty contest that is to be banned in France. Photo: Twentieth Century Fox

A nationwide ban on beauty contests for young girls has moved a step closer after French MPs voted to outlaw the pageants, dubed ‘mini-miss’ competitions, for anyone under 13.

The new rules were included as part of France’s landmark equality bill that was debated in the National Assembly last week and is aimed at battling what many see as they hyper-sexualisation of young girls.

A move to ban beauty pageants in France was first made in the Senate last year and quickly made headlines around the world and provoked debates in the US, over whether the same rules should be applied there.

Initially senators voted to introduce an outright ban for under 16s and implement stiff punishments for those caught flouting the law, including a possible two year prison sentence and a €3,000 fine.

However MPs in the lower house decided the punishments were too severe and the age limit too high, reducing it down to under 13s.

Nevertheless Michel Le Parmentier, who runs the official Mini Miss beauty contest said it was shame that young girls will not be able to dress like a princess. For Le Parmentier, American culture is to blame for spoiling the fun of young French girls.

“It’s the fault of the US. The concept of beauty contests over there is different to ours and that’s what the French government wanted to block,” he told The Local on Monday.

“Over there everything is exaggerated, where mums try to make their daughters look like themselves.

“In the US it’s all about looking sexy. They are dressed up in high heels, given false wigs, fake tan, fake teeth and transformed into Barbie dolls."

Le Parmentier accepts that these kind of competitions have been mimicked in parts of France and that it is a good idea to either ban them or regulate them.

He says the concept of his own Mini Miss contests that he began 25 years ago will have to be altered to avoid breaking the law.

“We will take out the part where the girls are judged on their appearance. Instead the judges will only look at talent," he said.

“It’s a shame for the little girls that they won’t be able to dress up like a princess. It’s a good idea to protect against excesses but the children don’t understand why they can’t dress up,” he added. French Minister for Women’s Rights Najat Vallaud-Belkacem initially thought the ban was too severe but has since decided action needs to be taken.

“There is a subject of hyper-sexualisation of little girls and there is a necessity to give authorities the means to control it,” she has previously said.

The new law is expected to pass through the Senate easily and be signed off by the President, after which it is expected to come into force later this spring.