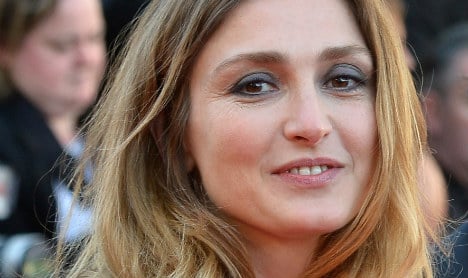 Slender, with light-chestnut hair, a ready smile and delicate features, the 41-year-old actress has played in films ranging from romantic comedy to thriller to drama, and is also a well-known face on television.

But she has steered clear of the public eye since a glossy magazine reported her affair with Hollande — other than to sue the magazine, Closer, for violating her privacy, seeking €50,000 ($68,000) in damages and €4,000 in legal costs.

Closer reported in its January 10 issue that Hollande, 59, routinely hops on a motor scooter to spend the night with Gayet in an apartment near the Elysée presidential palace, and has his bodyguard bring them croissants in the morning.

The scandal took its latest twist Saturday when Hollande told AFP he had split with his long-time partner Valerie Trierweiler, who had been France's First Lady.

Trierweiler, 48, has been holed up in a presidential residence outside Paris after being hospitalised for a week when Closer broke its story.

Hollande has known Gayet since at least 2012, when she campaigned for him ahead of the presidential election that brought him to power.

She featured in a campaign clip in which she described him as a "humble", "fantastic" man "who is really tuned-in".

Known for being energetic and headstrong, Gayet also recently campaigned in favour of gay marriage, one of Hollande's most socially divisive policy priorities.

Born in the upmarket Paris suburb of Suresnes on June 3, 1972, Gayet trained as an actress and studied art history.

After an internship in London with Jack Waltzer of the Actors Studio, she studied at the Fratellini Academy circus school in Paris and trained in classical singing.

She started her cinema career in 1993, appearing in Konstantinos Costa-Gavras's "Little Apocalypse" and "Blue", the first film in Krzysztof Kieslowski's "Three Colours" trilogy.

She followed that with "Select Hotel", directed by Laurent Bouhnik, playing a young drug-addicted prostitute — a role that won her the Romy Schneider prize in 1997, the French film industry's most prestigious award for emerging young actresses.

Gayet is known for being daring when taking on movie projects.

"What I like about this profession is entering into different worlds," she said in 2002.

In 2007 she opened a small production company, producing "Fix Me" by Palestinian Raed Andoni and "Bonsai" by Chile's Cristian Jimenez, among other films.

She described it as a "logical follow-up" to her work as an actress.

Last year she co-directed a documentary on filmmakers.

Gayet is the mother of two adolescent children from her union with the Argentinian author and screenwriter Santiago Amigorena, whom she married in the early 2000s. They have since separated.